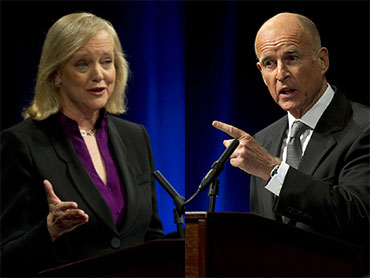 Unlike most unsuccessful political bids, the losing candidacies of Meg Whitman and Linda McMahon will go down in the annals with notable asterisks: Never in the history of midterm elections have two candidates spent so much for so little.

Stet: Make that for nothing.

Even in a midterm election where candidates have spent (so far) a combined $3.26 billion, the Whitman and McMahon campaigns are remarkable for the outsize spending by both candidates, who helped finance their respective campaigns from their own personal fortunes. But as much as money can buy media time and billboards - both of the dead tree and Internet varieties - it's still no substitute for political skill. And even in a national election in which many incumbents had a tough time of it, voters in California and Connecticut decided to go with experienced politicians over the promises of plutocrats.

Whitman, a billionaire Republican who made a fortune running eBay, spent $142 million of her own money in a race against Jerry Brown to be California's next governor (a job that pays $212,179 a year.) Still, Brown, a former California governor and political mainstay in the state since the 1970s, wound up defeating Whitman by a 50 percent to 45 percent margin.

In Connecticut, McMahon, a former wrestling executive, also reached deep into her similarly deep pockets, spending more than $41.5 million of her own money to fund her campaign against Richard Blumenthal to fill the seat held by the retiring Sen. Chris Dodd. Adding proverbial insult to injury, all that money hardly made any difference; Blumenthal breezed to victory over McMahon by a 52 percent to 46 percent margin.