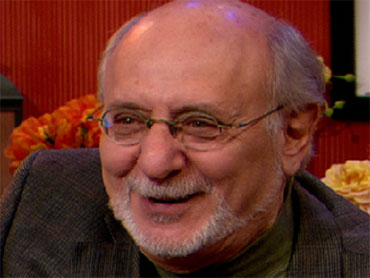 Peter Yarrow, of the legendary folk trio Peter, Paul and Mary, is most famous for co-writing "Puff, the Magic Dragon."

But Yarrow was sang quite a different tune on "The Early Show" Tuesday: the world premiere of his "Colonoscopy Song."

With co-anchor Harry Smith slated for a colonoscopy to be shown live on the show Wednesday, Yarrow explained to viewers why he thinks colonoscopies and other cancer screenings are very important.

Then, he launched into song:

The lyrics of "The Colonoscopy Song":

When I had my colonoscopy, I had a question on my mind
Do we all look the same when the doctor sees us from behind?
Then I had the answer, I felt like such a fool
Cause the doctor smiled and said to me, "Your colon's really cool."

My colon's really cool, what a nice surprise
He sees a lot of colons, but my colon took the prize

Then he added something that was even more divine
"We found a polyp hiding, Peter, but we caught it just in time
We found a poly hiding, don't mean to sound so crass
But the polyp was discovered by a camera up"

So…. listen to me closely for this not a lie
Colon Cancer can be beaten, if you are not camera shy
Call you doctor swiftly, no ifs or and or butts (sic)
Schedule your colonoscopy , I know you've got the guts. 1:47

My….. colon's really cool, what a nice surprise
My colon really groovy