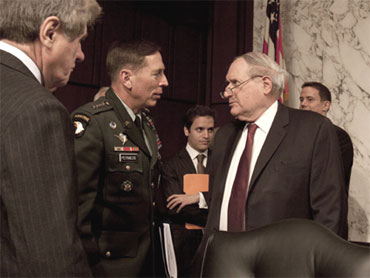 The man who oversees U.S. forces in both the Iraq and Afghan wars says the fighting in Afghanistan will "likely get harder before it gets easier" and predicts 2010 will be a difficult year.

On Iraq, Gen. David Petraeus said he expects the United States can reduce its forces as planned, from about 97,000 to 50,000 by the end of August.

As the architect of the successful troop buildup in Iraq in 2007, his assessment of America's wars is closely watched in Congress.

He said he expects U.S. forces will be able to reverse the momentum gained by Taliban militants in Afghanistan.

"2010 will be a difficult year - a year that will see progress and a reversal of Taliban momentum in important areas, but also a year in which there will be tough fighting and periodic setbacks," Petraeus said.