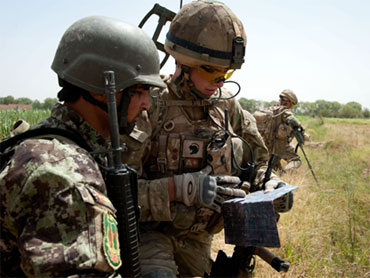 Gen. David Petraeus, the top U.S. commander in Afghanistan, said he has drafted operational guidelines to implement Karzai's goal of having Afghan police and soldiers take the lead in the country's 34 provinces by 2014 as security allows. It remains unclear whether the Afghans will be ready to handle their own security, even four years down the road.

"These guidelines recognize that this is a process, not an event," he said. "It will typically represent a thinning out of ISAF (International Security Assistance Force) forces not a hand-off per se."

Talk of a 2014 date enables politicians to tell their war-weary publics that the conflict will not drag on indefinitely, draining resources at a time of economic hardship and rising death tolls. It also sends a signal to the Afghans that the Western commitment to the country will extend beyond July 2011, when President Barack Obama says he will begin withdrawing U.S. troops.

"Transition likely will occur in districts, initially, rather than in entire provinces, although there are some provinces in which that likely will be possible," the general said.

Earlier, in an interview with NATO TV in Brussels, Petraeus said that Taliban guerrillas still retain the initiative in some parts of Afghanistan despite recent successes by coalition forces. Petraeus said NATO forces had reversed some of the gains the Taliban had made in recent years in the southern provinces of Helmand and Kandahar and around Kabul.

He said the insurgents were fighting to take back the market town of Marjah in Helmand province, which he described as "one of the most important command and control areas for the Taliban and the nexus for the illegal narcotics industry."

The town was captured in a highly heralded operation in February but has yet to see either solid security or effective government presence.

He also noted that NATO's campaign to secure the southern city of Kandahar had just begun.

"But clearly there's a lot more work to be done with the Taliban fighting back very hard," he said. "This is really (Taliban leader) Mullah Omar's hometown. This is the iconic place of the Taliban and it's very important for them and it will be tough."

He also noted that the Afghan security forces were growing faster than expected, with the army numbering 134,000 men and the police slightly more. 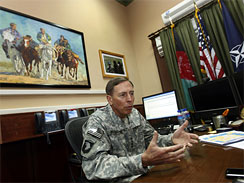 Petraeus said he shared Karzai's concern about threats across the border in Pakistan but said the Pakistanis deserve credit for waging what he described as an "impressive counterinsurgency campaign" during the past 18 months.

The Karzai government has been increasingly vocal in recent days about the need to destroy Taliban and al Qaeda sanctuaries in Pakistan.

Afghan National Security Adviser Rangin Dadfar Spanta has argued that U.S. support of Pakistan amounts to nurturing the terrorists' "main mentor" and that the Afghan people are no longer ready to "pay the price for the international community's miscalculation and naivety."

"Given the very clear linkage between attacks on Afghan soil by individuals who have come from Pakistan and are commanded and controlled from Pakistan, I think President Karzai and Dr. Spanta have very legitimate concerns," Petraeus said. Still, he added, the Pakistani government has continued to "squeeze the locations in which these individuals have safe haven sanctuary, recognizing that more work needs to be done."

In a wide-ranging interview, Petraeus said it's natural that the Afghan government wants to take more of a lead role in the handling of its own national affairs.

He said he's seeking clarification on the blunt criticism from Afghan governmental officials, but does not think the comments reflect diminished Afghan support for his counterinsurgency strategy, which aims to provide security and earn the trust of the Afghan people.

"Over time, I think it is very understandable - as was the case in Iraq as well - to see our host nation partners want to take the lead, want to be more prominent," he said.