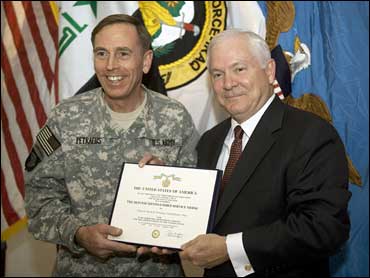 Both ascribe to a similar philosophy so tactics and missions probably won't change much.

U.S. and Iraqi casualties are way down since Petraeus took charge about a year-and-a-half ago.

Credit should go to the surge. But, not the surge alone.

Two other things happened almost simultaneously. Not long after the surge began Muqtada al Sadr, the powerful Shia leader, told his followers in the guerilla Mahdi Army to stand down.

There has been a ceasefire from them ever since, about the same time Sunni leaders fed up with the ultra-conservative religious bullying of Al Qaeda imports working in Iraq turned against the insurgency and started working with U.S. forces in something called awakening councils.

Petraeus deserves plenty of credit for getting Iraq close to stability. But for the record - the surge had help.