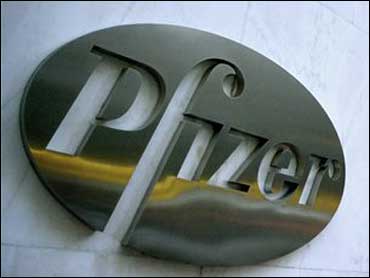 Shares of Pfizer Inc., the world's largest drugmaker, sank Monday on news that the company had halted development of a key new cholesterol treatment.

The company said Saturday that an independent board monitoring a study for cholesterol treatment torcetrapib recommended that the work end because of an unexpected number of deaths.

The news is devastating to Pfizer, which had been counting on the drug to revitalize stagnant sales that have been hurt by numerous patent expirations on key products. It has said it was spending around $800 million to develop torcetrapib, which was supposed to fill the void when its best-selling drug, cholesterol treatment Lipitor, loses patent protection in either 2010 or 2011. Lipitor sales totaled $12.2 billion last year.

"This is obviously unfortunate because this was the biggest opportunity in their pipeline," said Barbara Ryan, an analyst at Deutsche Bank. "Clearly there is more pressure on them to do cost cutting."

Pfizer will likely slash staff and accelerate merger and licensing deals as the pressure on it to improve its financial performance intensifies after the announcement.

Two months ago, Pfizer said it would detail plans in January to turn the company into a more nimble organization that would go beyond the program announced last year to cut $4 billion in expenses by 2008. Patent expirations will cost the company $14 billion annually between 2005 and 2007.

In the statement Pfizer issued Saturday, CEO Jeff Kindler said the company's pace of transformation will be expedited because of the loss of torcetrapib although he didn't give any specifics. Last week, Pfizer announced it was cutting 20 percent, or 2,200 jobs, of its U.S. sales force.

Ryan said Pfizer may lay off as many 10,000 people in the near future. Pfizer employs roughly 100,000 people. Ryan added that she expects Pfizer to hike its annual dividend from 96 cents to $1.10 per share in the next few weeks in the hopes of putting a floor on the stock.

But Jason Napodano, an analyst at Zacks Independent Research, does not think the dividend will be enough to prop up the shares. He points out that at the end of last month, Pfizer pulled out of its deal with drugmaker Organon to develop schizophrenia treatment asenapine. Napodano said he expected that drug to add $500 million in sales by 2010 while by that time torcetrapib's sales would total $3 billion.

"Losing asenapine was a hole in the boat. Now they have hit an iceberg," said Napodano.

Pfizer reiterated it hopes to introduce six new products to the market by 2010, but Napodano said its pipeline just doesn't have another drug which offers the sales potential of torcetrapib.

Ryan and Napodano both expect Pfizer to act swiftly to bring new products into the fold, either through acquisition or licensing. But Napodano said that until investors see what those products are, he sees little reason to buy the stock. He said he intends to review his "hold" rating on the stock.

Torcetrapib was supposed to reduce heart disease by raising good cholesterol, or HDL, reports CBS News medical correspondent Dr. Jon LaPook. And Torcetrapib is more than twice as effective at raising HDL as anything currently available. But 82 patients died while taking the drug, about 60 percent more than the control group. Hypertension and other heart problems were side effects.

Pfizer has two other products in early development to raise HDL, using the same method as torcetrapib. It is too soon say where they will be affected by the compound's demise because it still unclear what caused the patient deaths in the trial.

Torcetrapib had been shown to raise blood pressure in some patients but the other two compounds haven't displayed such a side effect, according to Pfizer.

Dr. Steven Nissen, chairman of cardiovascular medicine at the Cleveland Clinic, said it is too soon to say whether the entire class of drugs known as CETP inhibitors is dangerous or if there was something specific to torcetrapib that caused the deaths. He said that Roche Holding AG is developing drugs of the same type, and there's speculation that Merck & Co. is too. Merck declined to say if it had such a drug in its pipeline.

Roche spokesman Darien Wilson said that in clinical trials its compound has not shown a risk of elevated blood pressure and that it was slated for introduction in 2009.

Pfizer was hoping to seek approval for torcetrapib in the second half of next year.

Nissen said he will still examine the results of the study, and that if the trial showed that the drug actually increased plaque, it would indicate that there is something wrong with the way the class of drugs works.

Nissen, who has been an outspoken critic of the pharmaceutical industry, said he doesn't believe Pfizer will face any liability issues over the trial because it acted swiftly to tell the public and researchers about the problem. The results were unexpected because the review board examined the trial data in October and didn't see an increase risk of death, Pfizer said.

"I have to give Pfizer credit. They did everything the right way," Nissen said.

Analysts said that patients sign waivers, acknowledging that they are willingly participating in an experiment, which protect companies from most lawsuits. However, Fordham University School of Law professor Benjamin Zipursky said that warning patients of risks doesn't necessarily mean they can't sue later, especially if information about the trial wasn't adequately detailed or the company downplayed or hid any potential negative data about the drug.