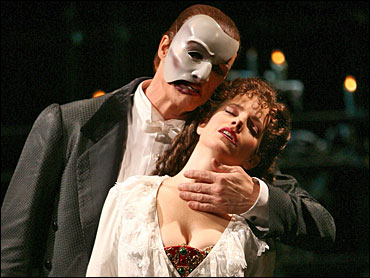 When the curtain goes up on "Phantom of the Opera" Monday night, a record will fall.

"Phantom" will become the longest-running show in Broadway history. With performance number 7,486, "Phantom" will beat out "Cats," another collaboration between composer Andrew Lloyd Webber and producer Cameron Mackintosh.

As Trish Regan observes, "Phantom" is one of Webber's most lavish musicals.

And with the new milestone, Webber and Mackintosh are basking in glory.

"It's extraordinary for someone who, at the age of 8, started dreaming of being a producer," Mackintosh marveled to Regan.

"I know I'll never be able to do it again," Webber reflected to Regan, "so (I'll) make the most of it, really."

The Phantom, Regan explains, is a disfigured man who haunts a Paris opera house, becoming the teacher, then tormenter, of a young singer.

Monday night, former "Phantom" cast members from the 80's to today will attend a gala performance.

The show has grossed more than $600 million, more than any other show on Broadway. Worldwide, it's made more than $3.2 billion.

2005 turned out to be the highest-grossing year ever for the musical and, with some theatergoers admitting they've seen the show 12 times, it's no surprise "Phantom" has had so much success.

Mary Leigh Stahl has been on board for the whole run.

Is she getting tired of it?

Hardly: "The phantom's last lair scene, I could stand in the wings and watch that every night."

It seems like the music of the night just won't fade away, Regan says.