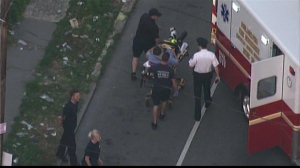 (CBS) PHILADELPHIA, Pa. - A Philadelphia police officer was struck by a car and dragged for nearly a block during a routine traffic stop on Tuesday night, reports CBS Philly.

The incident occurred shortly before 8 p.m. Officials say that the 26-year-old officer was making the traffic stop, when, for no apparent reason, the driver started to speed up, dragging him nearly a block.

The officer was taken to a nearby hospital, where he is reportedly in stable condition with bumps and bruises to his head, face, both arms and lower body, as well as a broken ankle, according to CBS Philly.

Prior to the incident, the driver had given the officer his license and registration. Without revealing the name, police described the suspect as a light-skinned 27-year-old male who, according to his license, is 6'2" tall and weighs 170 lbs., CBS Philly reported.

Last seen wearing a white tank top and dark-colored cargo shorts, he had multiple tattoos on his arms, shoulders, chest and lower back, according to police.

They also found a handgun a block away from where the truck was found. It is not known whether the gun is connected to this case, reported CBS Philadelphia.

Police are searching the suspect's known hangouts, and his last known address in Norristown.