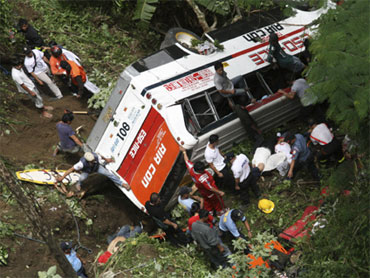 Search and rescue workers were able to pull nine passengers from the wreckage alive, including a 10-year old boy. Eight of the victims were hospitalized, according to police

The steep slope made it difficult for rescuers to retrieve the bodies stuck inside the mangled bus.

John Patrick Flores, the bus's conductor, survived the accident by jumping out of the door before the bus tumbled down the ravine. He told the Associated Press that the brakes failed as the driver was going around a downhill bend. He said the driver tried to hit a lamp post to prevent the bus from falling but missed it. The driver survived with a broken leg.

In a separate interview with French news agency AFP, he said the bus driver, "tried to ram the bus into a mango tree to prevent it from falling, but failed."

Flores said that the bus was not speeding as it had just dropped off and picked up passengers not far from the site of the accident.

However, after an initial investigation, local police said they suspected the driver was traveling at high speed when he lost control, though they did not rule out a mechanical failure.

Chief Inspector Teresa Guinto-Pucay of the Benguet police community relations office told local television network GMA News they were likely to press charges of reckless imprudence resulting in multiple homicides and serious physical injuries, not only against the driver but also the bus conductor.

This story was filed by CBS News' Barnaby Lo in Manila.