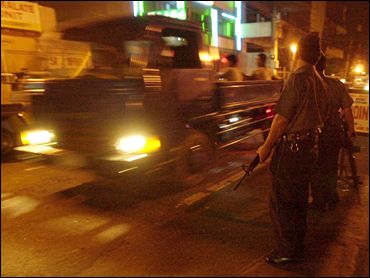 The Philippine government announced a cease-fire deal with a Muslim rebel group Friday, agreeing to drop arrest warrants against rebel leaders for alleged terrorism to pave the way for peace talks as early as next week.

The agreement was reached with the 12,000-strong Moro Islamic Liberation Front, which has been fighting for an independent Muslim territory in Mindanao and other islands of the southern Philippines for about three decades and has been blamed for deadly bombings and other terrorist activities.

Foreign Affairs Secretary Blas Ople said earlier that negotiations with the rebels could reopen in Malaysia next week.

The Philippine military launched an offensive against the rebel movement earlier this year amid an escalation in rebel attacks and bombings, and sporadic peace talks fell apart.

Aware that past talks have failed, Arroyo sounded an optimistic tone with the new cease-fire.

"I ask our people to give peace a chance," she said. "As we address the roots of rebellion and secession, I am confident that we shall also effectively isolate and marginalize the dwindling terrorist cells in Mindanao and across our seas in the region.

"Peace is at hand. We shall forge the political will to preserve it for all generations of Filipinos."

The government gave in to a key rebel demand that arrest warrants be dropped against rebel leaders for alleged involvement in a recent series of deadly bombings in the long-troubled south. The government wanted the group to petition the court for the suspensions, but the rebels don't recognize the Philippine constitution or justice system.

"With all these things, we're now ready to go back to the negotiating table," he said.

Arroyo thanked Malaysia, which has helped arrange the talks, and said she expects a Malaysian-led cease-fire observer team to arrive soon and would also seek help from members of the Organization of Islamic Conference.

"I also appreciate the role of President Bush for committing assistance to the rehabilitation of conflict-affected areas, which contributes greatly to the climate for peace to prosper," she said.

The government had talked about abandoning talks after a bomb killed three and wounded 26 others earlier this month in the south. But Arroyo also has said the bombing won't deter the government from preparing for negotiations with rebels unless the group is proven to be involved.

Ople said he expects the United States, through the Washington-based Institute for Peace, to support Malaysia in facilitating the talks. He said the U.S. Congress has allocated $30 million for financial and diplomatic support to the peace process.

U.S. support for Filipino efforts to fight terrorism stirred controversy this winter when American troops, which have previously served as advisers, planned a combat role in the country alongside Philippines troops. Amid public furor, the plan was scrapped.

The Moro Islamic Liberation Front is one of several Muslim organizations battling the government in southern Philippines. It split from the Moro National Islamic Front in 1977, after the MNLF adopted a more conciliatory line. Abu Sayyaf, another group, split from the MNLF in the 1990s.