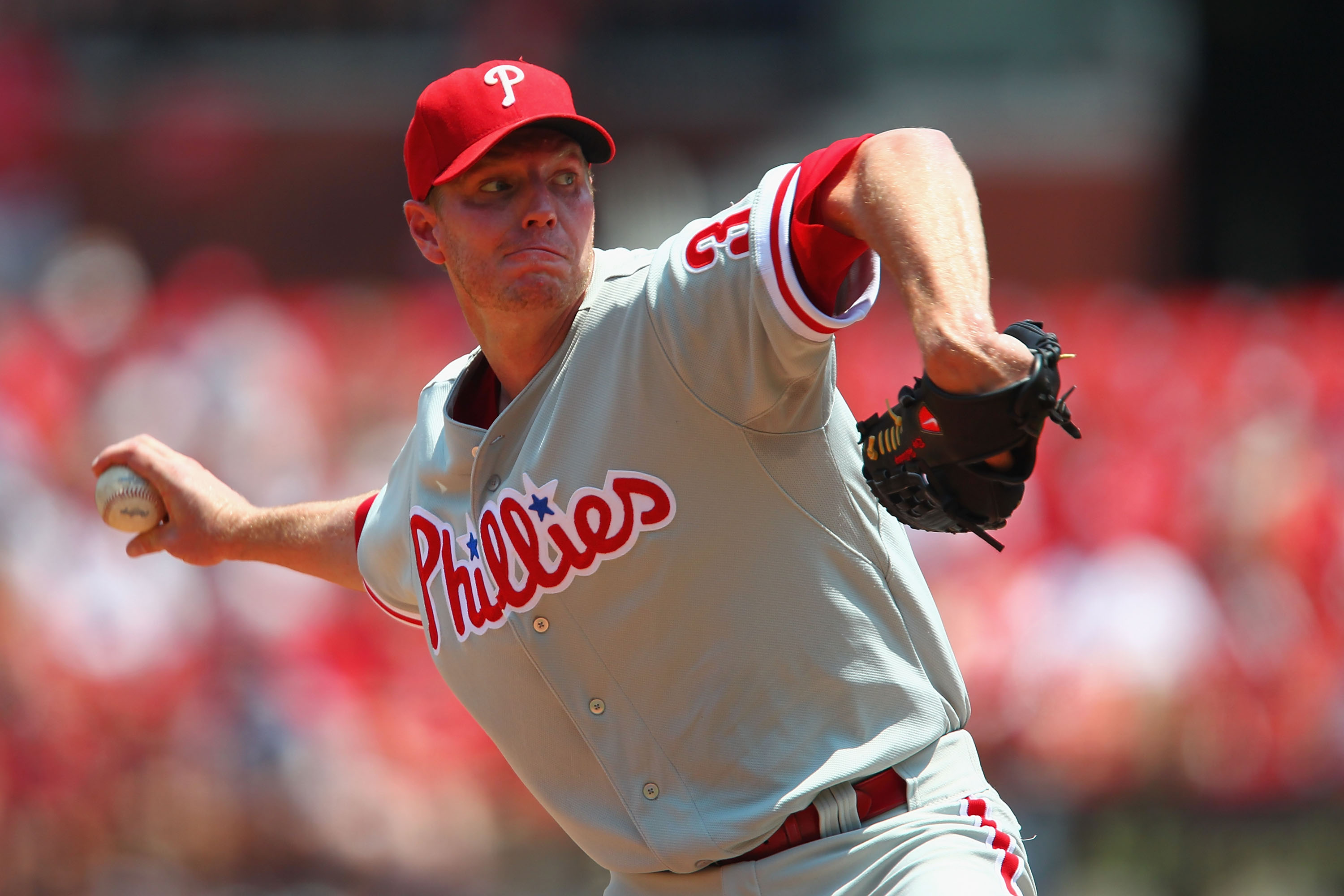 Halladay was put on the 15-day disabled list Tuesday, two days after he was hit hard and pulled from a start in St. Louis after just two innings because of shoulder soreness.

The two-time Cy Young winner will be shut down for a minimum of three weeks, then work toward rejoining the rotation, Phillies assistant general manager Scott Proefrock said.

"We hate to have him down, but it's nothing that requires anything other than rest," Proefrock said.

Halladay is 4-5 with a 3.98 ERA in 11 starts. He has pitched at least 220 innings in each of the past six seasons, and four times led the league in innings. His 72 1-3 innings this year tied Houston's Wandy Rodriguez for the NL lead.

The move with Halladay was made retroactive to Monday. Catcher Erik Kratz was recalled from Triple-A Lehigh Valley.

Minutes before the injury was announced as a Grade I/Grade II strain of the latissimus dorsi, Phillies manager Charlie Manuel said he thought Halladay needed a break.

Halladay has "thrown a lot of bullets over his career," Manuel said, suggesting the 35-year-old pitcher could step back for a bit and still be dominant. The durable Halladay had not been on the DL because of shoulder trouble since 2004.

The injury came with the Phillies at 26-24 and tied with Atlanta for last in the division, four games behind Washington.

Philadelphia has managed to stay close minus All-Star hitters Ryan Howard (Achilles tendon) and Chase Utley (knee), who haven't played at all this season. Manuel said he harbored hope that his slugging first baseman and smooth-fielding second baseman would be back at some point this year.

As for Halladay's absence, "it would hurt us," Manuel said. "How much, I really don't know."

The Phillies have relied on their pitching, particularly their rotation, to stick solidly in contention. Vance Worley, who is on the DL and hasn't started since May 11 because of elbow trouble, threw his first bullpen session since the injury before Tuesday's game.

Cole Hamels, Cliff Lee, Joe Blanton and Kyle Kendrick remain in the rotation, and there are a few potential replacements at Triple-A, including former big leaguers Dave Bush and Scott Elarton.

Another possible fill-in could be former Phillies star Roy Oswalt, who is a free agent and has attracted interest from several contenders.

"Yeah, we can always use pitching," Manuel said, while adding, "I'm not (GM) Ruben Amaro to get another."

Halladay initially felt discomfort in his shoulder last Tuesday in a start against Washington but worked through it. He cut back on his throwing regimen before his next outing, but was tagged by Yadier Molina's grand slam in St. Louis.

Halladay began the season by throwing eight strong innings in a 1-0 win at Pittsburgh on opening day and seemed fine until blowing a 6-0 lead against Atlanta on May 2. He's 1-3 since then and the Phillies have lost four of his five starts.

The eight-time All-Star came to the Phillies in a trade with Toronto before the 2010 season and got a $60 million, three-year contract. Halladay pitched a perfect game against the Marlins in that first season with Philadelphia, and later that year threw a no-hitter against Cincinnati in his first career postseason outing.

The Phillies won the 2008 World Series and hoped to capture another crown after adding Halladay. But Philadelphia lost to the eventual champion San Francisco Giants in the 2010 NL championship series, then Halladay lost to Chris Carpenter and St. Louis 1-0 in the deciding Game 5 of the 2011 division series.

"Trumpeters make a lot of noise and it's scary to see their enthusiasm," Martin said.