Troy was fine, Deion was dancing and Michael scored a touchdown. Are the Dallas Cowboys back? It was hard to tell against the Philadelphia Eagles on Monday night, but they looked much better than usual.

Michael Irvin scored his first touchdown of the year, Troy Aikman proved he's back from a broken collarbone and Deion Sanders ... well, they don't call him Prime Time for nothing. The Cowboys routed the hapless Eagles 34-0 for Philadelphia's worst start since 1975.

In his first start since missing five games with a broken collarbone, Aikman was 14-for-26 for 171 yards and two touchdowns. Sanders returned a punt 69 yards for a touchdown, and Irvin ended his seven-game TD drought with an 10-yard catch from Aikman in the first quarter.

"I think for the first time out in five weeks, I'm pleased with my performance," said Aikman, who didn't panic when he received a crushing hit on the first play of the game. "I knew I didn't get hit on the shoulder."

And don't forget Emmitt Smith, who ran for 101 yards and a TD in his third 100-yard rushing game of the year and 52nd f his career.

The defense did its part as Dallas (5-3) recorded its first shutout ever against Philadelphia, a span of 78 games.

For the Eagles, this Monday Night Massacre was even worse than they had feared.

"When you have a game like this in Philadelphia on Monday night, and you get all hyped up, it's difficult," said Eagles quarterback Rodney Peete, who left late in the first quarter after his finger was cut to the bone, requiring stitches. "I know I'm not going to throw in the towel, and I know a lot of guys in the locker room who are not going to throw in the towel."

The 34-point debacle was Philadelphia's worst prime time defeat since a 42-3 loss to the Rams on Nov. 3, 1975. That was the infamous "Dog Bone Game" in which fans passed large bones around Veterans Stadium to signify that the Eagles were playing like dogs.

There was plenty if ugliness to go around on this night.

Any questions about the Cowboys' playoff chances? Please see Messrs. Aikman, Irvin, Sanders and Smith. Dallas retained a one-game lead over Arizona in the weak NFC East and rebounded from a 13-12 loss at Chicago two weeks ago.

Peete was knocked out with a cut on, and former starter Bobby Hoying was blitzed and brutalized into a horrible 13 for 39, 124-yard performance with two interceptions. The ugly loss left the sellout crowd at Veterans Stadium in a foul mood even by Philly standards.

The Cowboys, 3-2 in five game with Jason Garrett at quarterback, were much sharper with Aikman.

Sacked and driven into the turf by Hollis Thomas on the first play of the game, Aikman got right up and led the Cowboys on a 47-yard drive that culminated with Richie Cunningham's 33-yard field goal. The key play was an 11-yard completion to Sanders on third-and-10.

Peete left with a cut on his finger late in the first quarter. He was replaced by Hoying, who watched Charlie Garner fumble his first handoff at the Philadelphia 9

Two plays later, Irvin made his first TD catch of the season to make it 10-0. The timing was perfect on the little out pattern to the far corner of the end zone that has accounted for many of Irvin's 46 TD catches from Aikman in their careers.

A sloppy, penalty-filled game was cleaned up in a hurry by Sanders, who caught Tom Hutton's punt at the Cowboys 31, faked left, faked right and ran past at least five defenders to the end zone to make it 17-0. Hutton was the last to take a one-handed swipe at Sanders before Prime Time celebrated with his customary dance.

The crowd 67,002 was incredibly loud at kickoff, hoping the Eagles could bring some semblance of meaning to their season. Among the few who remained at the end held a banner that read "Put In Boomer," referring to ABC announcer and former quarterback Boomer Esiason.

"Sign Man," who's been hanging signs at the Vet for about 20 years, checked in with two beauties in huge black letters across the field from the Philadelphia bench: "We deserve better," and once it got really ugly, "Stadium? Build a Kennel."

Things are that bad for the Eagles. 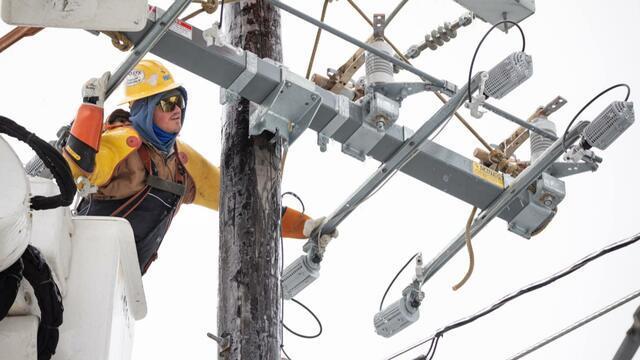 Meghan Markle and Prince Harry open up to Oprah

Prince Harry and Meghan Markle are revealing more about their decision to step away from their royal duties. Jamie Yuccas has a preview of their sit-down with Oprah for Sunday night's CBS special.