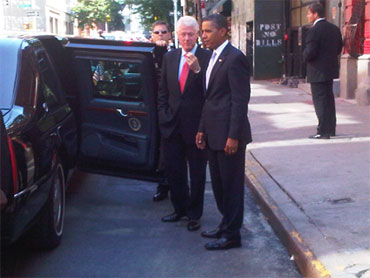 President Obama and former President Clinton shared lunch today at Greenwich Village Il Mulino. CBS News White House correspondent Peter Maer was there, and he took the photo at left as the two presidents exited after the meal.

The restaurant, according to The Business Insider, "which first opened in 1981, is famous for its old school, trend-resistant fare, its gruff service and not ever answering the reservations line."

"I asked the President what they talked about" at lunch, White House spokesman Robert Gibbs told reporters later. "He said most of the conversation was about the economy, particularly the global economy, and ways to transition where we are into something that works better for the American people in the 21st century."

Mr. Obama and Clinton were in New York together last week for Walter Cronkite's memorial service.