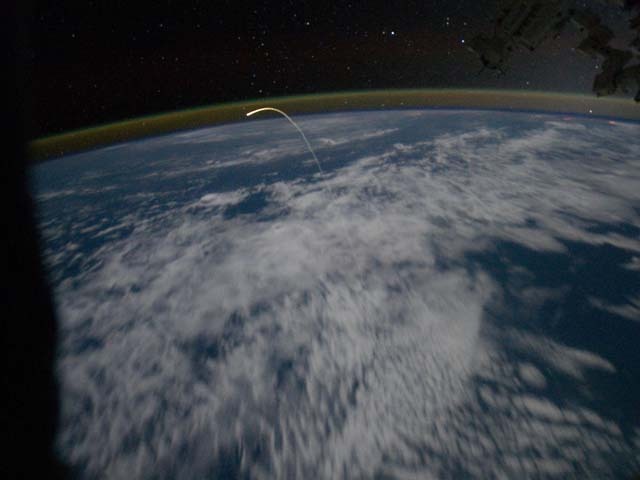 An amazing new photo snapped by an astronaut in orbit shows the fiery trail left by the space shuttle Atlantis as it plunged through Earth's atmosphere today (July 21) on its final trip home.

The photo was taken by an astronaut on the International Space Station. It shows the bright plasma trail created by Atlantis as the shuttle zoomed through the atmosphere on the way to a picture-perfect landing in Florida.

Atlantis flew NASA's final mission of the 30-year space shuttle program, so the new photo is the last time an astronaut will ever see a shuttle plasma trail from orbit.

"This unprecedented view of the space shuttle Atlantis, appearing like a bean sprout against clouds and city lights, on its way home, was photographed by the Expedition 28 crew of the International Space Station," NASA officials explained in a photo description. "Airglow over Earth can be seen in the background."

Atlantis landed at NASA's Kennedy Space Center at 5:57 a.m. EDT (0957 GMT) today to complete the 135th and final mission of NASA's shuttle program. The shuttle fleet is being retired to make way for a new program aimed at deep space exploration to an asteroid or Mars.

But before Atlantis touched down in Florida, it was flying in orbit at a speed of about 17,500 mph (28,000 kph). After firing its rocket engines to slow down, the shuttle plunged into Earth's atmosphere at hypersonic speeds, creating a plasma glow of super-heated air around its heat shield.


It's that glow that space station astronauts photographed in the amazing image. During Atlantis' landing, NASA officials said that American astronaut Mike Fossum on the station radioed Mission Control in Houston to say he could see the glow of Atlantis' re-entry from the orbiting lab's Cupola observation deck.

Atlantis' commander Chris Ferguson also radioed Mission Control during re-entry. He said he wished he could share the beauty of the plasma glow with everyone on the ground.

"We're elated to be back here in Florida," Ferguson said after landing.

During their 13-day flight, Ferguson and three crewmates delivered a huge haul of supplies to the International Space Station to help keep it stocked now that the shuttle fleet is no longer flying. Their mission was the 135th and final flight of NASA's shuttle program, which first launched into orbit in April 1981.

But now, Atlantis is in Florida to stay.

The shuttle will eventually be moved to the nearby Kennedy Space Center Visitor Complex to be placed on display as a museum showpiece.  NASA's other space shuttles —Discovery, Endeavour and the prototype Enterprise, which never flew in space — will also be sent to museums.