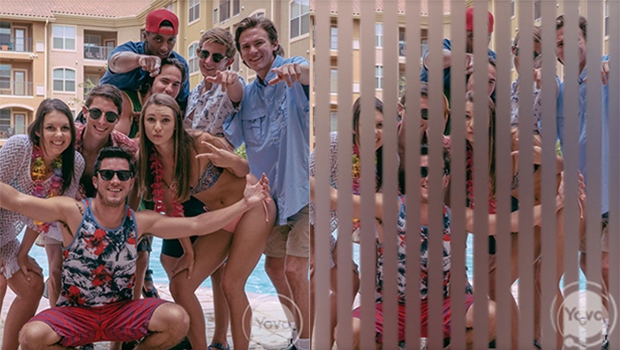 Popular photo sharing app Snapchat may notify you when the recipient of your image takes a screenshot -- but it doesn't actually make it harder to grab that screenshot in the first place.

New iOS app Yovo is looking to make a change in that direction. Created by privacy software company ContentGuard, it uses a novel solution to protect your snaps from screenshots: because it can't do anything about controlling user behavior, it uses an optical illusion on the images themselves.

The illusion it uses is simple -- the Barrier Grid illusion. This is similar to what you might experience driving past a picket fence: as you speed past, your eyes tend to see the stationary scene behind the palings, rather than the palings themselves.

When you take a picture, the app overlays a blurred grille over the image. When the receiver opens the image, the grille moves, allowing them to see the picture -- but if they try to take a screenshot, it will always result in an image with blurred sections.

"Everyone is becoming more conscious of the digital trail they leave. It seems as though there isn't a day that goes by where we don't see a headline about the consequences of inadvertent or malicious digital publication of our private lives," said ContentGuard's Scott Richardson.

"Let's face it -- not every moment or message is meant to be shared or stay online forever. Yovo represents a new way to create and share photos and messages in a more private, fun and interactive way."

The app also allows you to send photos from your camera roll, selectively blur portions of an image, choose who sees what and for how long, and set a self-destruct timer on messages and photos from one second to up to 24 hours.

One thing the company doesn't mention, though, is whether it stores and keeps user images. CNET has contacted ContentGuard and will update when we receive more information.

Meanwhile, you can download Yovo for free from the iTunes app store, and check out a video of how it works below.