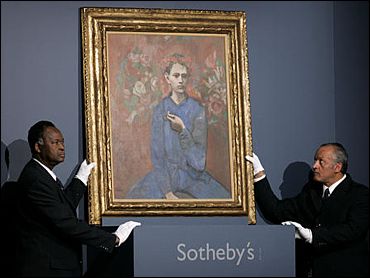 Willem de Kooning once said, "Picasso is the guy to beat."

Though de Kooning was talking more about fame than fortune, Pablo Picasso is the new champion on the art auction block.

Picasso's 1905 painting "Boy with a Pipe" sold for $104 million Wednesday at Sotheby's, breaking the record for an auctioned painting.

The total includes the auction price of $93 million plus the auction house's commission of about $11 million.

"This is the finest work in private hands that was going to be available for sale," said David Norman, Sotheby's senior vice president.

The previous record was set by Vincent van Gogh's 1890 "Portrait of Doctor Gachet," which was sold to a Japanese billionaire for $82.5 million in 1990 at Christie's. That price included the auction house's premium.

Sotheby's did not say who bought "Boy with a Pipe."

A 24-year-old Picasso painted "Boy with a Pipe" soon after settling in Montmartre, France. It depicts a young Parisian boy holding a pipe in his left hand and wearing a garland of flowers. John Hay and Betsey Whitney bought the painting in 1950 for $30,000.

Sotheby's called the work, which had a presale estimate of $70 million, "one of the most beautiful of the artist's Rose Period paintings and one of the most important early works by Pablo Picasso ever to appear on the market."

The previous highest-selling Picasso piece was "Woman with Crossed Arms," a Blue Period painting done in 1901 and 1902, which sold for more than $55 million in November 2000 at Christie's. It was the fifth-highest auction price paid for a work of art.

"Boy with a Pipe" was part of a collection of major works by Picasso, Edouard Manet, Edgar Degas and others that headlined an auction of 34 paintings from a charitable foundation created by Betsey Whitney, a philanthropist, Sotheby's said.

Also on the auction block was "Courses au Bois de Boulogne," by Manet. Painted in 1872, it depicts a sunny day at the horse races and features a top-hatted figure in the lower-right corner that is thought to be Manet's fellow racing enthusiast Degas. It sold for $26.3 million.

The collection, which had a presale estimate of more than $140 million, netted $190 million. The proceeds will go to the Greentree Foundation — created in 1982 by Betsey Whitney following the death of her husband.