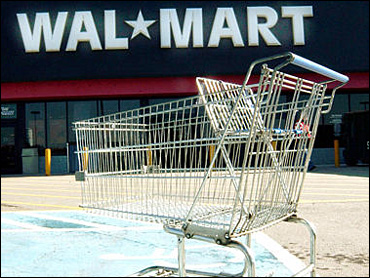 A union-sponsored protest rallies at Wal-Mart stores across the nation Thursday to draw attention to the retail giant's salary and benefit policies. Picketers were absent in the Arkansas-based company's home state.

In March, a state judge in Arkansas issued a permanent injunction prohibiting the United Food and Commercial Workers International Union from soliciting inside Wal-Mart buildings and stores.

Union spokesman Greg Denier said members avoided Arkansas out of concern about what response state courts would have to the pickets.

"Wal-Mart uses the judicial system in the state of Arkansas to promote its interest," Denier said from a rally in Alexandria, Va. "We stayed out basically because of the court injunction and the concern over what Arkansas courts might do on behalf of Wal-Mart."

The union says it has joined with more than 120 nonprofit groups and other unions in its efforts to improve the lot of Wal-Mart workers. The groups want Bentonville, Ark.-based Wal-Mart Stores Inc., the world's largest private employer, to pay workers more and improve benefits.

"We think it's unfortunate that the union is using these rallies to discredit our company," the Wal-Mart release said. "We are confident our customers will keep this union activity in perspective."

The union contends Wal-Mart workers don't earn a decent wage, with an average salary of $7.50 hourly, and nearly two-thirds have no health insurance. The company said it offers unrivaled career opportunities and treats workers well.

"We make sure to offer competitive wages and benefits, including health care, in every market we are in," Wal-Mart spokeswoman Mona Williams said. "We couldn't run our business otherwise."

Wal-Mart has more than 1.3 million employees in the United States and abroad.