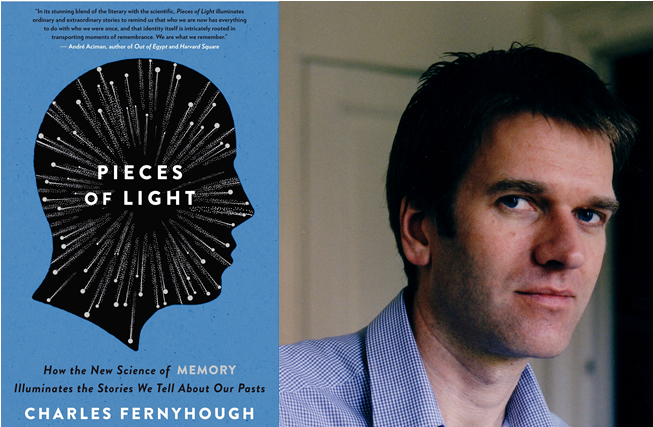 Jeff Glor talks to Charles Fernyhough about "Pieces of Light: How the New Science of Memory Illuminates the Stories We Tell About Our Pasts"

JG: What inspired you to write the book?

CF: I wanted to write a slightly different kind of science book, one that was based on real people's stories as much as it was about communicating scientific findings. I'd become interested in memory through some creative writing teaching I'd been doing, in which I was asking writing students to think about what a reader's brain has to do when it's processing a literary text. And the construction of a self-narrative through memory was a key theme of my previous nonfiction book, about my daughter's early psychological development. Memory is a perfect topic for a slightly left-field approach to science writing, because it's all about personal stories. I'd like readers to come away feeling that they've spent some time in the company of a rewarding narrative that deals with characters and emotions, as well as knowing plenty about the latest research.

CF: Memory is difficult! It's complicated; it has many moving parts. Our memories are actually memories of memories; they're shaped by who we are now as much as who were back then; and they're susceptible to influence, distortion and bias from many quarters. That made it a challenge to pull it all together, but thankfully there is this fairly strong consensus now about the reconstructive nature of memory, backed up by some ingenious psychological and neuroscientific research. And I was lucky enough to be able to talk to some fascinating and inspiring people -- a trauma victim, an amnesiac, my elderly grandmother -- who shared their stories with me and taught me a lot about what it's like to be a rememberer.

CF: I have a part-time academic post, and I conduct research on topics such as hallucinations and child development as well as memory. If I had to give up all the bookish stuff completely, I'd be trying to make it as a progressive rock guitarist. Yeah, I know.

CF: Because I studied science rather than literature, there are big gaps in my reading. I'm currently trying to fill a Shakespeare-shaped hole by working my way through his collected works. I still tend to get some of the comedies mixed up, but I'm making progress.

CF: I've been working on a novel about a neuroscientist, entitled "A Box of Birds." I'm interested in how we as a society consume neuroscientific information: why we're so attracted to it, and what it might mean for us as people trying to make sense of our experience. My protagonist feels differently about who she is because of what she knows about her own nervous system. Crucially, it makes her act differently too. Fiction is a great way to explore these ideas because it essentially allows you to set up a human experiment: you can create a character with certain beliefs, emotions and secrets, put her in a predicament and see how she acts. In the right hands, the novel can teach us a huge amount about who we are as people.

For more on "Pieces of Light" visit the Harper Collins website.