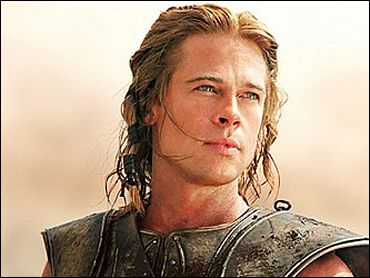 To play the Greek hero Achilles in "Troy," the most physically demanding film of his career, Brad Pitt gave up something he loved: smoking.

"This guy's supposed to be the greatest warrior of all time; I had to get my (butt) in shape," Pitt tells Vanity Fair magazine for its June issue. "I changed my life completely. I quit smoking, and let me tell you, I was a professional smoker and I still miss it. ...

"But I wanted to see how far I could go with my body," he adds. "By the time the movie was over, I'd been on this diet and workout plan for a year."

Something the 40-year-old actor hopes to add to his life: children with his wife, Jennifer Aniston, which has become a topic of rampant media speculation.

"It will happen when it happens," Pitt says.

"I've got friends with kids, and I've got nieces and nephews, and they just bring out a joy I've gotten from few things. I am selfish, so I worry about having to give up my time, but I gotta go see what it's about," he says. "I think I've got a lot of stuff to tell them, and the idea of being responsible and setting someone loose in the world sounds really fulfilling."