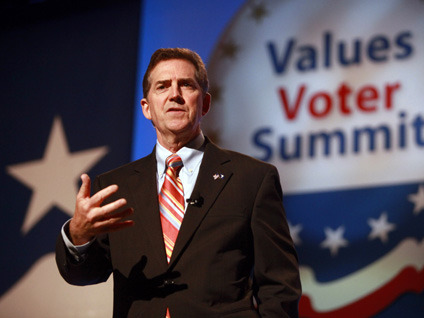 Senator and Tea Party darling Jim DeMint released a statement this afternoon announcing that he and nine other senators are proposing a moratorium on earmarks in the new Congress.

"If adopted, this earmark ban will unite Senate Republicans with House Republicans in taking a stand against wasteful, pork-barrel spending," DeMint said in the statement.

The proposal sets up a standoff between the Tea Party wing of the Senate GOP - Lee, Johnson, Paul and Rubio all got strong Tea Party pushes during their campaigns - and establishment Republicans in the Senate such as minority leader Mitch McConnell.

According to Politico, McConnell has been working behind the scenes to defeat the earmarks ban by trying to convince senators not to automatically side with DeMint.

McConnell's argument is that eliminating earmarks would do little to reduce the budget deficit while handing over spending authority to the White House. Because the moratorium would be nonbinding, Republicans could still push for earmarks, exposing them to charges of hypocrisy, and Democrats could also force Republicans to vote against popular earmarks in order to remain ideologically consistent.

On CBS' "Face the Nation" Sunday, McConnell said the problem with an earmarks ban is "it doesn't save any money." While earmarks make up more than $15 billion of the budget, they account for less than one percent of the budget overall.

Speaking of his concerns about giving the White House more control over spending, he added that the issue is "about an argument between the executive branch and the legislative branch over how funds should be spent." He told Bob Schieffer he would consider an earmarks ban that applied to both parties, not just Republicans.

But DeMint is aggressively pushing a Republican earmarks ban, arguing in his statement that "Americans want Congress to shut down the earmark favor factory."

"Instead of spending time chasing money for pet projects, lawmakers will be able to focus on balancing the budget, reforming the tax code and repealing the costly health care takeover," he said.

Senate Democrats have shown little inclination to ban earmarks. President Obama has argued that while earmarks are sometimes used wastefully, something he opposes, "Done right, earmarks have given legislators the opportunity to direct federal money to worthy projects that benefit people in their districts, and that's why I've opposed their outright elimination."

The president did ban earmarks from the stimulus package, though lobbyists worked around the ban.

The fact that Cornyn has signed onto DeMint's effort is a sign of strength for the South Carolina Republican in light of the fact that the two men were often at odds during the primary season, when DeMint often backed candidates other than those supported by Cornyn's National Republican Senatorial Committee. Many of the Tea Party candidates DeMint backed eventually lost in the general election.

The two are now working together, however, and DeMint said in his statement that he is cosponsoring DeMint's proposal that the Senate Republican conference support a Balanced Budget Amendment that would call for less spending and a "supermajority" to raise taxes.

"Senator Cornyn's amendment is critical to stopping the runaway spending that is mortgaging our children's' future," DeMint said.