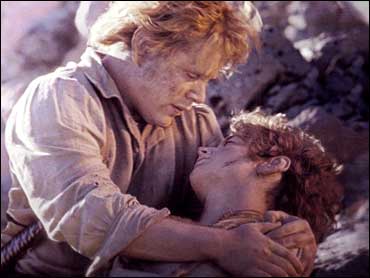 After summer, the holidays are Hollywood's busiest time of year. Close to 40 new films will be released by the end of the year. The Early Show entertainment contributor Jess Cagle offers a preview of what looks to be the biggest and best in our Weekend Marquee.

The holiday movie season is made up of crowd-pleasing favorites, star-studded epics, or those looking for Oscar gold. Some have hopes of all three. Hollywood's reigning king and queen each have new films and expectations are every high.

Three-time Oscar nominee and box office titan Tom Cruise stars as a disillusioned civil war soldier who discovers himself while modernizing the Japanese army in "The Last Samurai."

When a woman's daughter disappears, she is forced to put aside her differences with her father. Cate Blanchett and Tommy Lee Jones star in director Ron Howard's first western, "The Missing."

Paul Walker plays a man who travels back to 14th century France in "Timeline," based on the Michael Crichton novel.

Matt Damon and Greg Kinnear are conjoined twins in "Stuck On You." It also stars Cher as the one and only Cher.

Eddie Murphy hopes to have a "Pirates Of The Carribean" level of success with the family comedy "The Haunted Mansion", also based on a Disney theme-park attraction.

Cheaper By The Dozen

Steve Martin and Bonnie Hunt play the parents of twelve kids in "Cheaper By The Dozen."

"Peter Pan" gets the live-action treatment on Dec. 25.

When it comes to Oscars, no film this year has a higher pedigree than "Cold Mountain." The film stars Oscar-winner Nicole Kidman along with nominees Jude Law and Renee Zellweger. Based on the best-selling novel, it was written and directed by Anthony Minghella, who won in 1997 for "The English Patient." But the film does look to have a lot of Oscar competition.

William H. Macy plays the unluckiest man in Vegas. His luck changes when he meets a waitress, played by Maria Bello, in the Sundance hit "The Cooler."

Girl With A Pearl Earring

Hollywood's latest "it" girl Scarlett Johanssen stars as "Girl With A Pearl Earring."

House Of Sand And Fog

Oscar winners Jennifer Connelly and Sir Ben Kingsley battle over a northern California home in "House Of Sand And Fog."

The Lord Of The Rings

But the film to beat this year is the third installment of "The Lord Of The Rings" trilogy, "The Return Of The King."