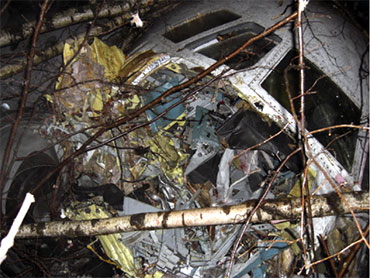 A Russian airliner carrying eight crew members and no passengers crashed in a forest while trying to land at a Moscow airport early Monday, injuring the crew, officials said.

Rossiya television reported that one of the flight attendants walked through the snow to a nearby highway unaided and hailed a taxi. Other crew members were rescued by emergency workers and hospitalized with injuries. At least one was in serious condition.

TV footage showed the plane's broken fuselage lying in the snow amid trees about 1.5 kilometers (one mile) from the airport. There was no sign of fire, apparently because the plane had little fuel left when it went down.

Galanova said on Rossiya television that the same plane experienced a technical malfunction over the weekend while on a commercial flight from Moscow to Egypt, and had to turn back.

She said that after the problem was fixed, it flew to Egypt's Red Sea resort of Hurghada, and was returning to Moscow empty when it crashed on final approach.

Galanova said there was no apparent link between Saturday's malfunction and Monday's crash, saying that the crew reported no problem as it prepared to land.

The Tu-204 is a twin-engine medium-range airliner designed in the 1980s in the Soviet Union to compete with Boeings and Airbuses. The post-Soviet economic meltdown derailed plans for its large-scale production, and only about 60 such planes have been built since 1990.

Authorities were investigating whether the crash was caused by pilot error, a technical malfunction or both. They also ordered the airline to suspend all flights pending an official investigation.