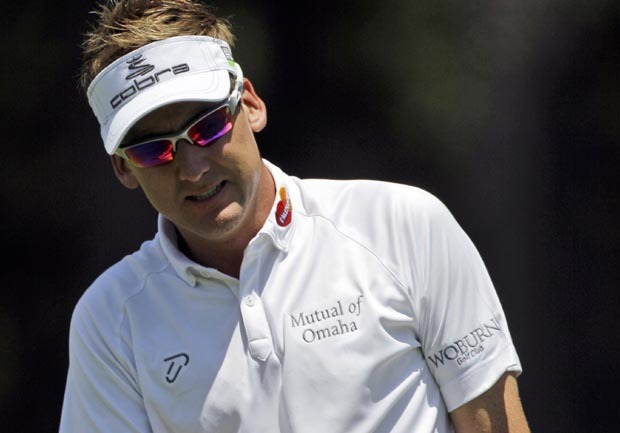 (CBS/AP) PONTE VEDRA BEACH, Fla. - Ian Poulter is enjoying his new digs — his newly built home and his spot atop the leaderboard Thursday in The Players Championship.

His 7-under 65 on the TPC Sawgrass wasn't nearly as stressful as the construction that took nearly three years.

Poulter spent so much time moving into his new house at Lake Nona in Orlando last week that he barely had time to practice. At least now he can concentrate solely on his golf.

"It's no surprise to me to be fresh in the mind this week, to know that I'm finally in the house and I'm relaxed and the family is happy, and all of the hassle and stress is over and I can just go out and play golf," he said. "And I have felt relaxed this week."

That's not easy to do at Sawgrass — Tiger Woods can certainly attest to that — yet it helped Poulter that he made birdie on all of the par 5s and had nine straight one-putt greens, a streak that ended with a long two-putt for par on the 18th.

That gave him a one-shot lead over Blake Adams among the early starters. And he was nine shots clear of Woods.

Woods at least kept alive one streak. He had never broken 70 in the opening round of this tournament.

This time, he wasn't even close.

He opened with a bogey and was never under par in a round of 74. Coming off a rare missed cut at Quail Hollow, Woods was in jeopardy of missing consecutive cuts for the first time in his career, and leaving before The Players Championship was over for the third straight year.

The conditions were ideal for scoring for those hitting it where they were aiming, and making their share of putts.

Adams ran off five straight birdies early in his round and kept the mistakes to a minimum.

Kevin Na shot 30 on the back nine and was at 67, alone with Ben Crane, who has been seen on television in recent weeks on the final green to congratulate winners — Bubba Watson at the Masters, Rickie Fowler last week in the Wells Fargo Championship.

Matt Kuchar had three straight birdies late in his round and was in the group at 68.

Phil Mickelson, inducted into the World Golf Hall of Fame on Monday, and world No. 1 Rory McIlroy were among the late starters.

Poulter's new home looks more like a hotel, and it took about as long to build. It became such a headache for him that when asked to go over the problems he had with contractors, Poulter looked at his watch and said, "How long you got?"

With that out of the way, his mind was free for golf, on a course that seems to suit him well. He was runner-up three years ago, four shots behind Henrik Stenson. But he found the right recipe on a sunny, warm day at Sawgrass. His birdie putts on the par 5s were all within about 5 feet. When he started missing greens on the back nine, he chipped close for par.

He hit 9-iron to a front pin on the island-green 17th to about 10 feet for birdie, then made it through the 18th without drama.

"I played really solid today and holed the right putts at the right times," Poulter said. "I feel like I'm back to normal, and I feel like I'm out there playing the golf I feel I should be playing."

Adams is playing this event for only the second time — he missed the cut last year with rounds of 72-76 — and hasn't been getting much out of his game this year. He told his caddie and coach that it was time to stop trying to hit the perfect shots and enjoy himself, and a 66 left him thrilled.

"I was just trying to make every putt," he said of his run of birdies.

The star group of the morning was Woods, Fowler and Hunter Mahan, the only player with two wins this year. None of them were particularly impressive. Fowler failed to save par when missing greens that killed his momentum and shot 72, while Mahan hit two shots into the water on his way to a 74.

Two-time major champion Angel Cabrera played a solid round, if only golf were a 16-hole round. He went over the 11th green and into the water, leading to a double bogey. And then he reached the island-green 17th, which proved to his undoing. His first shot went into the water. Cabrera went to the drop area and saw two more balls sink to the bottom of the pond for a 9. He played those who holes in 8 over and shot 78.

Sunghoon Kang made a quadruple-bogey 8 on the opening hole and still played the front nine in even par. He made 3 on his next three holes — eagle, par, birdie.

Na opened with a 30 on the back nine was feeling good until his ball got stuck in a tree and never came down on the first hole, leading to a double bogey.

"I made the turn at 30 and I'm thinking, `A few more on this side to have a chance for a course record. I don't know what the course record is — 63?" he said. "I figured if I got two or three more ... it was very doable. But right off the bat, I made double, so that was a pipe dream."

It's dangerous to look ahead on this golf course. Poulter was tempted — not so much for the crystal trophy, but what he could do with the $1.71 million winner's check.

"I'll buy another car, for sure," he said. "Ferrari Enzo. Been looking for one of them for a while."

CBSSports.com's Steve Elling notes that at the tournament they often call the Players, the players are second banana to the course.

"Beguiling and bewitching, Sawgrass has proven to be one of the toughest courses for elite players to solve, and has become the most democratic venue in the game," Elling writes. "Bombers, plinkers and everybody in between has won over the past decade, and about the only certainty is that the guy who is hoisting the trophy at the end can claim, with nary a second thought, that he outplayed the other 143 guys in the field."