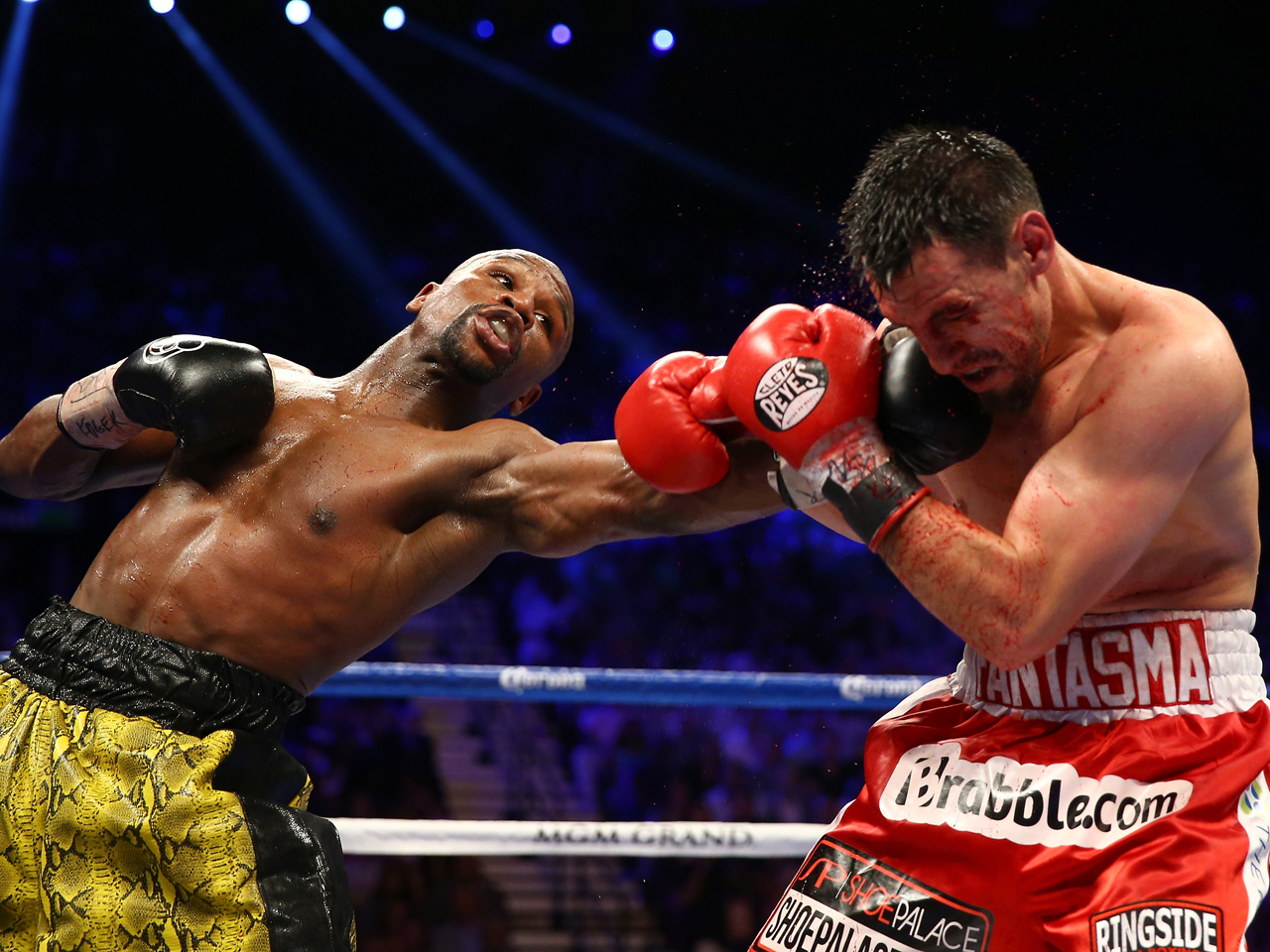 And Mayweather was a winner once again — just like he always is.

Mayweather fought as if he had never left the ring, coming back from a year's absence Saturday night to win a unanimous 12-round decision over Robert Guerrero in their welterweight title fight.

The game plan was defense, and Mayweather followed it perfectly. With his father directing from the corner after a 13-year absence, he dominated Guerrero in a performance not totally expected at the age of 36.

"I needed my father tonight," Mayweather said. "My defense was on point and he told me to stick with my defense and that the less you get hit the longer you last."

Mayweather was masterful at times, landing thudding right hands and bloodying Guerrero's face in a performance that mimicked some of his best fights. Mayweather hurt Guerrero on several occasions, including a series of right hands near the end of the eighth round that buckled Guerrero's knees.

"We did it again," Mayweather said after earning at least $32 million for his night's work. "I take my hat off to Robert Guerrero. He's a true warrior."

If it wasn't terribly pleasing to the crowd of 15,880, it was terribly effective. Mayweather made a fighter who hadn't lost in eight years look befuddled as he danced and moved and shot out right hands with increasing frequency.

He remained unbeaten in 44 fights and, more importantly, looked so fresh that he may follow through on his plan to fight again in September.

"I was looking for the knockout but I hurt my hand," Mayweather said. "I feel bad I didn't give the fans the knockout."

Mayweather was booed at times for not mixing it up more, but he didn't need to. He was content to move and land jabs and right hand leads, while Guerrero grew increasingly frustrated trying to chase him.

When Guerrero did hit him, Mayweather quickly got out of the way and, more often than not, landed a right hand of his own.

"I landed some good shots on him," Guerrero said. "He's a great fighter. He's slick and quick."

The fight at the MGM Grand arena settled into a familiar pattern from the third round on as Mayweather made adjustments and started landing some crisp right leads to Guerrero's head. Guerrero was eager to trade punches, but often couldn't find Mayweather, who had already moved out of range.

Before the fight there had been some concern about Mayweather having ring rust after going a year without a fight. But he didn't miss a beat, using his defensive skills to baffle Guerrero and keep him off balance.

Mayweather was a 5-1 favorite coming into the fight, but Guerrero was considered dangerous coming off a big win over Andre Berto. Guerrero hadn't lost in eight years, and vowed to be the first to beat Mayweather, now 44-0.

But he had never fought Mayweather, who got hit more than normal in his last fight against Miguel Cotto a year ago.

"Honestly, Floyd could have danced the whole night," Floyd Mayweather Sr. said. "There wasn't anything he couldn't do in there tonight."

Mayweather had crafted much of his career using his defense as his main weapon, and said he turned to his father — who used to be his trainer — to regain his old style.

"After the Cotto fight I realized my defense wasn't what it should be and I had to hone my skills," Mayweather said.

By the fifth round Mayweather's confidence was growing and he began landing some heavy right hands to Guerrero's head. Guerrero kept plodding after him, but paid the price as Mayweather shot counter right hands through his defenses

Mayweather was faster and stronger than Guerrero, who was fighting for only the third time at 147 pounds. Mayweather said he hurt his right hand while going after the knockout in the eighth round, but still managed to control the fight round after round.

Guerrero (31-2-1) was cut over his left eye in the eighth round, when Mayweather seemed on the verge of stopping him.

Ringside punch stats showed Mayweather landing 60 percent of his power punches, an unusually high rate. That included 23 of 30 power punches in the eighth round, when Guerrero was wobbled.

All told, Mayweather was credited with landing 195 punches to 113 for Guerrero.

"He ran like a chicken," said Guerrero's trainer and father, Ruben. "I thought we were going to go toe-to-toe with him."

Robert Guerrero didn't complain about Mayweather's style at all. Not when he wants to fight him again some day.

"I'm going to keep fighting and hopefully before Floyd Mayweather retires I'm going to get that shot again," Guerrero said.

Mayweather said he planned to fight again in September, a short turnaround for him, as part of a six-fight deal he has with the Showtime network.