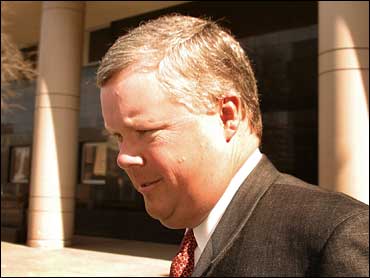 Enron's former chief accounting officer, Richard Causey, has struck a plea bargain with federal prosecutors and will avoid going to trial with two top executives in January, The Associated Press has learned.

Causey was expected to plead guilty Wednesday to one or more of the 34 criminal charges pending against him, a person familiar with the talks told The AP Tuesday on condition of anonymity because of the private nature of the negotiations.

Causey, 45, agreed to testify against his former bosses, Enron Corp. founder Kenneth Lay and former CEO Jeffrey Skilling, in exchange for a much lesser prison sentence than he would receive if convicted on all counts.

Causey is charged with fraud, conspiracy, insider trading, lying to auditors and money laundering for allegedly knowing about or being in on a series of schemes to fool investors into believing Enron was healthy when complicated financing structures propped up a facade of success.

U.S. District Judge Sim Lake has scheduled a change-of-plea hearing for Wednesday afternoon. Causey pleaded not guilty to the charges against him when he was originally indicted in January 2004.

Causey's plea and agreement to cooperate with prosecutors is a departure from the unified defense he, Skilling and Lay have shown for nearly two years.

Daniel Petrocelli, Skilling's lead lawyer, said earlier Tuesday that he intended to ask Lake to postpone the Jan. 17 trial for up to two months if Causey were to strike a plea deal. The additional time would allow his team and that representing Lay to prepare for yet another key prosecution witness.

Lay's lead lawyer, Michael Ramsey, didn't immediately respond to a request for comment, nor did one of Causey's lawyers, Reid Weingarten.

Causey could be more damaging to Lay and Skilling than former Enron finance chief Andrew Fastow, who joined the government's cadre of cooperating witnesses when he pleaded guilty to two counts of conspiracy in January 2004. Unlike his former peer, Causey didn't skim millions of dollars for himself from shady deals and therefore would bring less baggage to the witness stand.

"While they were preparing to deal with Fastow, Causey is another matter," said Robert Mintz, a former federal prosecutor. "Fastow has been so demonized by the books and media accounts of the Enron collapse that he is an enticing target for the defense teams."

Barring any last-minute changes, Causey would become the 16th ex-Enron executive to plead guilty and agree to cooperate with the government.

Enron, once the seventh-largest company in the country, crumbled into bankruptcy in December 2001 upon revelations of hidden debt and inflated profits that sent investors running and obliterated Wall Street confidence. Thousands of workers lost their jobs and investors lost billions in a the first of a string of corporate scandals that prompted stiffened white collar penalties and more rigorous regulatory scrutiny.

Without Causey at the defense table, the trial, originally estimated to last four to six months, will likely be shorter because the government won't have to present evidence against him.

Causey was indicted about a week after Fastow cut a deal with prosecutors and agreed to help the government pursue former top Enron executives.

Skilling was added to the indictment in February 2004, followed by Lay in July that year.

The 35 counts of fraud, conspiracy, lying to auditors and insider trading pending against Skilling largely overlap with those against Causey, where he, too, is accused of painting a falsely rosy public picture of Enron until his abrupt resignation in August 2001. The seven counts of fraud and conspiracy against Lay alleged he perpetuated the ruse after Skilling quit.

Causey was one of many Enron accountants who once worked for the energy company's former auditing firm, Arthur Andersen LLP. He joined Enron in 1991 and was named chief accounting officer in 1999.

Causey was fired in February 2002 when an internal probe concluded he failed to adequately look out for Enron's interests when the energy company did deals with partnerships run by Fastow, through which the former finance chief skimmed more than $45 million for himself, his family and friends.

Prosecutors allege that Causey forged a "global galactic" written agreement with Fastow that promised profits to Fastow's partnerships from deals with Enron.

To this day, advocates have been struggling to locate more than 600 migrant parents. President Biden has pledged to create a task force to help locate them.