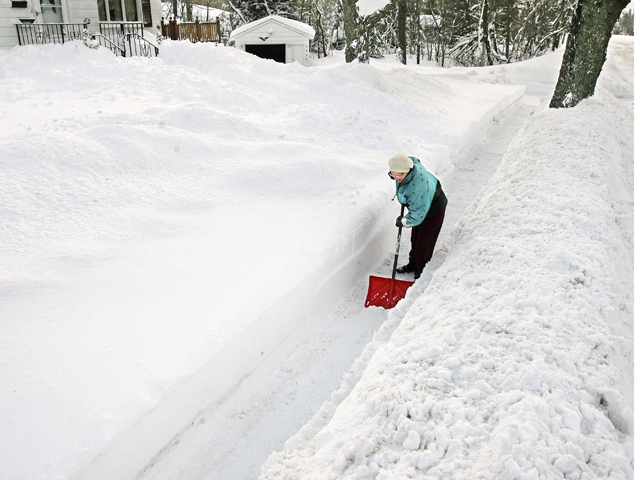 Texans to New Yorkers were bundling up on Thursday against winter weather that closed schools and businesses, blanketed roads and power lines with ice and threatened to disrupt travel across a wide swath of the United States.

The southern plains and central region, including Texas, Oklahoma, Arkansas and Missouri were expected to be especially hard hit, according to the National Weather Service.

Parts of Texas were already covered in ice. Roads near Odessa were treacherous. Up to a half inch of ice is forecast for Dallas. Three hundred salt and sand trucks are ready.

"This is big," said Ryan LaFontaine, with the Texas Department of Transportation. "Winter weather in the Dallas-Fort Worth area is big."

The department prepares as if it's the Super Bowl, he said.

Oklahoma's governor on Thursday declared a state of emergency.

Holly Vines, a Little Rock resident, hoped she could still find something on the shelves.

Utility provider Entergy Arkansas said it was bringing in an additional 6,700 workers to help with downed power lines and outages that could last a week. The company urged people to make sure they had flashlights, fresh batteries, food, water and first-aid kits.

Many roads and highways in northwest Arkansas were also iced over. Schools, including the University of Arkansas, were closing early or canceled classes entirely. Arkansas State Police said there were numerous reports of car accidents.

"In some locations, a glaze of ice may span several days and last into the weekend," meteorologist Alex Sosnowski said on AccuWeather.com.

Missouri and states eastward and north to New York are likely to see more snow than ice as the wintry weather hits Thursday evening, bringing up to 6 inches of snow to such cities as St. Louis, Pittsburgh and Albany, New York, meteorologists said.

The National Weather Service said four inches to eight inches of snow was forecast for Missouri overnight and into Friday.

The frigid weather sweeping across the Midwest and Southern Plains follows a storm that dumped up to 22 inches of snow in parts of Minnesota earlier this week.

It was so cold in Fargo, N.D., that the salt used to melt the road ice would not work. The sub-zero wind chills are forecast through the weekend.

In South Dakota an ice skating rink in Rapid City was closed this week to protect public safety, officials said. The temperature was forecast on Thursday night to drop to 18 degrees below zero.

The rink annually draws about 20,000 visitors in a state used to severe winter weather, but the cold and accompanying high winds this week are too extreme, said Megan Whitman, spokeswoman for the group that runs the rink.

The West Coast is not being spared the chill, with record-setting low temperatures predicted through the weekend in parts of California and Oregon that could threaten citrus and other crops in the area, AccuWeather.com officials said.