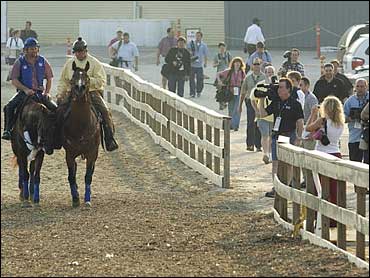 Smarty Jones has done absolutely nothing to make trainer John Servis believe the Preakness will be any different from the Kentucky Derby.

"For anyone to beat him," Servis said Friday, "they will really have to run. While I haven't let him do that much the last two weeks, I have seen enough to know he's ready to roll."

Smarty Jones rolled past Lion Heart to win the Derby by two-and-three-quarter lengths, and will be the heavy favorite Saturday to repeat that performance against nine challengers in the $1 million Preakness.

With a win, Smarty Jones would run his perfect record to 8-for-8 and head to the Belmont Stakes in three weeks with a chance to become the 12th Triple Crown winner and first since Affirmed in 1978 - and join Seattle Slew as the only horses to win all of their races through the Belmont.

Pretty dramatic stuff for a Pennsylvania-bred who nearly died in a training accident last year, a trainer and jockey from small-time Philadelphia Park, and owners who sold their farm and just about all their horses.

It's been 26 years since Affirmed swept the Derby, Preakness and Belmont, the longest drought without a Triple Crown champion since Sir Barton became the first in 1919.

There's been a Triple try five of the past seven years, though, with Funny Cide taking the Derby and Preakness before finishing third in the Belmont on a muddy track. Two years ago, War Emblem won the first two legs, but stumbled at the start of the Belmont and finished eighth.

Servis is calling the 1 3-16th-mile Preakness the toughest race yet. Smarty is running for the fifth time in 11 weeks, and the two-week turnaround after the Derby could take a toll.

"If we can get through this, we could have a good chance to win the Triple Crown," the trainer said. "Right now, we have to take this one day and one race at a time."

Servis has said Smarty Jones would run in the Preakness only if was as physically fit as he was before the Derby. Two weeks of controlled jogs and gallops seem to have made him even stronger.

A Friday morning gallop at Pimlico confirmed it.

"His pony bounced into him a couple of times, which stirred him up a little but that's all right," Servis said. "He will be ready for a good fight."

With The Cliff's Edge scratched Friday because of an abscess on his right front foot, Smarty Jones will face four familiar foes from the Derby: runner-up Lion Heart, Imperialism (third), Borrego (10th) and Song of the Sword (11th).

Five others are ready to take a shot at Smarty, including Eddington and Rock Hard Ten, who missed the Derby because they didn't have enough graded-stakes earnings. Also entered are Little Matth Man, Sir Shackleton and Water Cannon, a Maryland-bred who has won his last five races.

The early weather forecast calls for temperatures in the upper 80s with a 40 percent chance of rain in the late afternoon. Post time is 6:15 p.m. EDT.

Smarty Jones has thrived on both wet and dry tracks.

Patrick Biancone, who trains tough-luck Lion Heart - second in all three of his starts this year - hopes to devise a winning strategy for his front-running colt. For now, he's not giving anything away.

"If I tell you what we will do, everyone will know," he said.

Why send out Lion Heart again after he tired in the stretch two weeks ago?

"It will be difficult to beat Smarty Jones, but this is horse racing. You have to try," he said.

There's a lot of money at stake, too.

Smarty Jones has a chance to earn another $5 million for owners Pat and Roy Chapman if he sweeps the Triple Crown. The owners already collected a $5 million bonus from Oaklawn Park owner Charles Cella after Smarty won the Rebel Stakes and Arkansas Derby at Oaklawn in Hot Springs, Ark., and the Kentucky Derby.