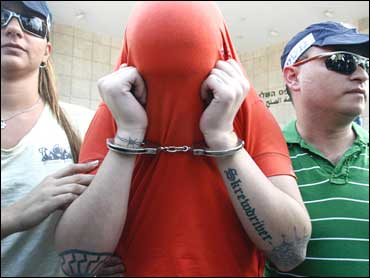 In a case that would seem unthinkable in the Jewish state, police said Sunday they have cracked a cell of young Israeli neo-Nazis accused in a string of attacks on foreign workers, religious Jews, drug addicts and gays.

Eight immigrants from the former Soviet Union have been arrested in recent days in connection with at least 15 attacks, and a ninth fled the country, police spokesman Micky Rosenfeld said, in the first such known cell to be discovered in Israel.

All the suspects are in their late teens or early 20s and have Israeli citizenship, Rosenfeld said.

A court decided Sunday to keep the young men in custody. They covered their faces with their shirts during the hearing, revealing their tattooed arms, and did not comment.

News of the arrests came as a shock in Israel, which was founded nearly 60 years ago as a refuge for Jews in the wake of the Nazi Holocaust and remains a most sensitive subject. Any forms of anti-Semitism around the world outrage Israelis, and the discovery of such violence in the country's midst made the front pages of newspapers and dominated talk on morning radio shows.

The gang documented its activities on film and in photographs. Israeli TV stations showed grainy footage of people lying helpless on floors while several people kicked them, and of a man getting hit from behind on the head with an empty bottle.

Police found knives, spiked balls, explosives and other weapons in the suspects' possession, Rosenfeld said. One photo that was seized showed one suspect holding an M16 rifle in one hand and in the other, a sign reading "Heil Hitler," he added.

Police discovered the skinhead ring after investigating the desecration of two synagogues that were sprayed with swastikas in the central Israeli city of Petah Tikva more than a year ago, Rosenfeld said.

Police computer experts have determined they maintained contacts with neo-Nazi groups abroad, and materials seized include a German-language video about neo-Nazis in the U.S.

The group planned its attacks, and its targets were foreign workers from Asia, drug addicts, homosexuals, punks and Jews who wore skullcaps. In one case they discussed planning a murder, Rosenfeld said, without providing details.

Some of the victims filed official complaints with police, and other victims were identified after police viewed the films and photos.

In the past, there have been only isolated cases of neo-Nazi activity in Israel. "This is the first time that we've ... arrested such a large number of individuals who are part of an organized neo-Nazi group," Rosenfeld said.

Under Israeli law, a person can claim citizenship if a parent or grandparent has Jewish roots. Authorities say that formulation allowed many Soviets with questionable ties to Judaism to immigrate here after the Soviet Union disintegrated. About 1 million Soviets moved here in the late 1980s and early 1990s.

Rosenfeld said all the suspects had "parents or grandparents who were Jewish in one way or another."

Israel doesn't specifically have a hate crimes law, and suspects in past cases have been tried as Holocaust deniers, he said.

The Anti-Defamation League, a U.S.-based group that fights anti-Semitism, condemned the neo-Nazi cell, but urged Israelis not to stigmatize the entire Russian immigrant community based on the acts of what appeared to be a marginal group.

"The suspicion that immigrants to Israel could have been acting in praise of Nazis and Hitler is an anathema to the Jewish state and is to be repelled," the statement read. "The tragic irony in this is that they would have been chosen for annihilation by the Nazis they strive to emulate."

Amos Herman, an official with the semiofficial Jewish Agency, which works on behalf of the government to encourage immigration to Israel, said the phenomenon was not representative of the Russian immigration.

He called the gang a group of frustrated, disgruntled youths trying to strike at the nation's most sensitive core.

"We thought that it would never happen here, but it has and we have to deal with it," he said.