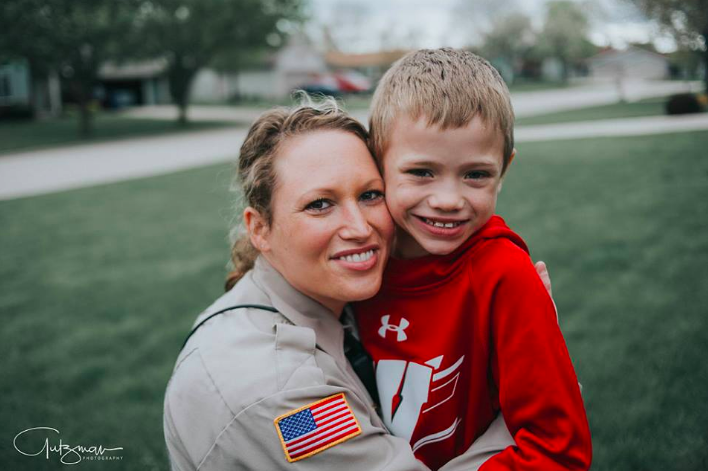 An 8-year-old Wisconsin boy and a police officer will soon share an unusual bond: a kidney. Social media can be thanked for linking up the two.

Lindsey Bittorf, a police deputy in Milton, Wisconsin, saw a Facebook plea for a kidney donor from the mother of Jackson Arneson, who was born with a chronic kidney condition.

The family had long known Jackson would need a new kidney one day, but when that time arrived late last year, it was hard.

Last December, Kristi Goll wrote on her Facebook page: "Jackson went in for a routine kidney appointment the end of November. At this appointment, his labs showed that his kidney function is still decreasing and the doctors are in talks of activating him on the deceased donor list for a kidney transplant."

A kidney from a live donor would be an even better solution, the doctors told her. So the worried mother made an difficult request.

"I always knew these days would come, it's just so hard when they are here. I have reached out before, I am just trying again to see if we can find anyone out there that would be interested in being tested," Goll's post explained.

"Please help me get the word out and please contact me if you would be interested in being a living kidney donor. This would be the very best gift we could receive," Goll wrote.

Bittorf saw the post, went in for a blood test and learned she was a match.

"After months of searching for a kidney donor for Jackson, I can say, 'the search is over!!' I can't even put into words how amazing of a gift we are receiving from this amazing person. She surprised us after work today and I still feel in shock. Jackson is so excited and says, 'I think my new kidney will make me run faster!' Today you became our hero," Goll told her Facebook followers on May 2.

"Jackson forever has his hero. Lindsey, I already feel so connected to you... and I've known you for a day. We cannot thank you enough for continuing Jackson's journey with us," Goll wrote.

The transplant is scheduled for June 22.