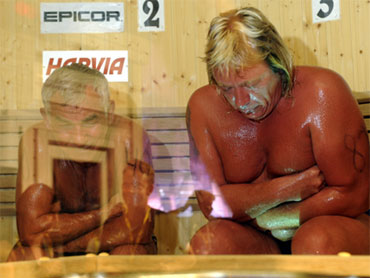 A Russian man trying to win the Sauna World Championships died after collapsing with severe burns in the final stage of an event that required contestants to sit in a 230-degree room as water was tossed onto a searing stove, officials and witnesses said.

Vladimir Ladyzhenskiy, an amateur wrestler who was in his 60s, was pronounced dead late Saturday after he collapsed alongside reigning champion Timo Kaukonen of Finland roughly six minutes into the final round.

Nearly 1,000 spectators had gathered in the southern Finnish town of Heinola to watch 130 competitors from 15 countries, waving flags and cheering on the contestants before medical workers pulled the shaking and bleeding men out of the sauna.

Video footage shows workers pouring cold water over the two men and administering first aid as organizers tried to cover up the scene and calm spectators.

The men were bleeding from what appeared to be severe burns, said Hakon Eikesdal, a photographer with the Norwegian daily Dagbladet.

Ladyzhenskiy headed a charity fund in the Siberian city of Novosibirsk. The fund's spokesman Konstantin Kruglyansky told the LifeNews daily that his family has demanded an investigation into his death.

The annual contest had been held since 1999. It will never be held again, Arvela said.

Half a liter of water is added to the stove every 30 seconds and the last person to remain in the sauna is the winner.

There was no prize other than "some small things" Arvela said. He declined to provide details.

Eikesdal said Kaukonen — the defending world champion — had refused to leave the sauna despite getting sick and that organizers had to force the men out.

Sauna bathing is a popular pastime in the Nordic countries and Russia, but especially in Finland, which has an estimated 1.6 million saunas for a population of 5 million people. Temperatures are normally kept around 158 to 176 degrees.

"I know this is very hard to understand to people outside Finland who are not familiar with the sauna habit," Arvela said. "It is not so unusual to have 110 degrees [Celsius] in a sauna. A lot of competitors before have sat in higher temperatures than that."

According to a research report from 2008, the annual death rate in Finnish saunas was less than 2 per 100,000 inhabitants, representing around 100 Finns a year. It said the majority of deaths were due to natural causes, such as heart problems and that half of the deaths occurred under the influence of alcohol. Around 25 percent of the deaths were the direct result of the heat exposure.

Arvala said all rules in Saturday's competition were followed and the temperatures and times were similar to those in previous years.

He said police are investigating the death.