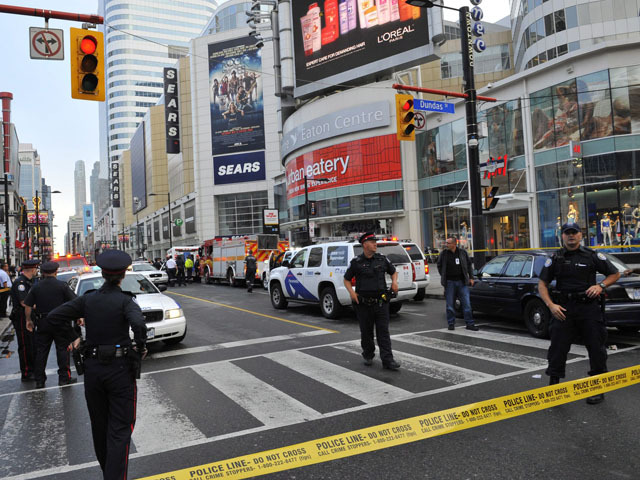 (AP) TORONTO - A gunman fired shots in a crowded food court in one of Canada's busiest malls Saturday killing a man and injuring seven others, police said.

Police Chief Bill Blair called it a targeted shooting against one individual and said there were a number of innocent bystanders. Police constable Victor Kwong said two people were in critical condition after being shot at the Eaton Centre in downtown Toronto, including a 13-year old boy. The 25-year-old man who was killed died at the scene, he said.

Kwong said six people were shot in all, including the deceased.

Two people were trampled on and pushed, including a pregnant woman who went into labor after she was pushed, Kwong said. Blair said investigators have a description of the suspect.

"Any place for discharging a firearm in Toronto is dangerous, in the food court of the Eaton Centre on a Saturday evening, it's not only dangerous, it's outrageous," he said. "I believe every Torontonian is shocked and appalled by this crime."

Witnesses said multiple shots were fired in the mall's food court and that hundreds of panicked shoppers sprinted for the exits. The mall, which is popular with tourists, was evacuated.

Swarms of people watched from outside as an injured man with visible bullet wounds was wheeled out on a stretcher.

Toronto Blue Jays baseball player Brett Lawrie tweeted that he sprinted out of the mall after hearing the shots.

"People sprinting up the stairs right from where we just were ... Wow wow wow," Lawrie tweeted.

Marcus Neves-Polonio, 19, was working in the food court when he saw a man pull out a gun and start firing. At least two people were on the ground, he said.

"All of a sudden a herd of people were just running toward us, a massive crowd of people screaming, running, freaking out," said Hannah Stewart, 21, a shopper. "We saw this girl, sitting on the ground, and she had blood on her toes." The girl appeared to have been one of the victims and told Stewart she had just been shot.

Erica Solmes, who manages the McDonald's in the mall's food court, said she heard about 15 shots ring out before a stampede of people made a dash for the exits. Transit service around the mall was shut down for a time.

In 2005, a 15-year-old girl was killed during the Christmas holidays just north of the mall in a shooting that shocked the city during a year of record gun deaths in Toronto.

"Today harkens back to that terrible moment," Blair said. "I am very sadly reminded of that. That was one of the most tragic and shocking events that ever took place in Toronto."

Kwong said police are in the process of reviewing security tapes. He said they had concluded a search of the mall.