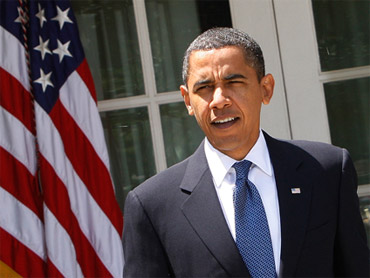 "There is more recognition that this president has been in quite a political battle this year and it's likely to continue," said a member of the Congressional Black Caucus, Rep. Artur Davis, an Alabama Democrat. "There's certainly a sense of pride and accomplishment, but there's also a sense that gains that were hard-won can be easily lost."

Mr. Obama, who is scheduled to address the CBC's annual legislative conference Saturday night, belonged to the all-Democratic, 42-member caucus before winning the White House. The only senator in the group, he wasn't particularly active and isn't especially close to many of its members.

Questions remain about how hard Mr. Obama can fight for the anti-poverty, education and health care proposals that helped him win near-universal support from black voters. There also is a growing realization that he will likely face years of criticism - some of it motivated by race - over his administration's response to a sour economy and other issues.

Some in the CBC acknowledge Mr. Obama must govern more from the center to be a successful president. However, many of the group's more liberal lawmakers expect him to seize the opportunity created by strong Democratic control of Congress to push through initiatives that have long been blocked by Republicans, such as public health insurance and sharp funding increases for urban development.

This is particularly true as the economic recession takes an outsized toll on black communities.

"We want him to stand strong," said Rep. John Conyers, a Michigan Democrat.

In a conference call recently, Mr. Obama reminded CBC members that most of them represent politically safe districts, and that Democrats must look out for the interests of vulnerable moderates to maintain majorities and achieve their goals.

The CBC conference draws thousands of elected officials, business leaders and other professionals from around the country.

So far this week, the White House has gone out of its way to reassure them that it is committed to generating new opportunities for minorities. Along with Mr. Obama's Saturday address, the administration dispatched a team of Cabinet secretaries to earlier panel discussions to highlight initiatives for creating jobs, improving education and preventing home foreclosures.

"It's still very early and people are hopeful that things will get done," said Valerie Maholmes, a behavioral scientist from Washington who was attending a Thursday session on rebuilding the economy.

Many attendees said they remain incredibly proud that the nation elected a black president and are optimistic about the future, despite the economy.

"I think for the first time probably in the history of America the black community feels they are in a position of power," said James Bryant, a union leader from San Francisco. "I think African-Americans think there is no more wall."

Bryant and others said they anticipated that Mr. Obama would face fierce resistance from the right. But some said they don't understand the intensity and sometimes personal nature of the opposition.