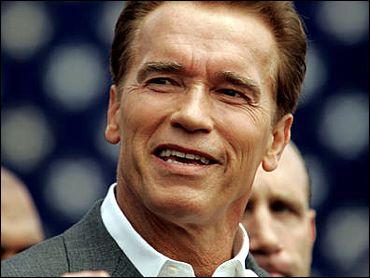 For the first time since Gov. Arnold Schwarzenegger took office, less than half of California's likely voters approve of the way he is doing his job, according to a new poll from the Public Policy Institute of California.

The findings released Thursday reflect a negative trend that began in January when the governor announced plans for a special election this year and proposed a series of controversial ballot measures.

The poll found voters are split over two of Schwarzenegger's three proposed initiatives — a majority support his plan to make it harder for public school teachers to gain tenure but a similar number oppose his proposed restrictions on the state budget.

Schwarzenegger is on the down side of a major statewide poll for the first time: 47 percent of likely voters surveyed by the Public Policy Institute disapprove of his job performance, while 45 percent approve, and 8 percent are undecided. In January, the poll found 60 percent approval for the governor and 33 percent disapproval.

While the numbers indicate growing disenchantment with Schwarzenegger, the poll's author said a lot could change in the coming weeks. Two big events could give Schwarzenegger a chance to clarify his goals for the state — the release of his revised budget plan expected in mid-May and his pending decision on whether or not to hold the November special election.

"We're seeing now several months of growing doubts about the governor's leadership," said poll director Mark Baldassare. "It's been a period in which the governor has not been able to get his message out as effectively as some of his opponents."

After enjoying enormous popularity during most of his first year in office, Schwarzenegger's standing has slipped since he proposed the special election, which is opposed by Democrats and their primary supporters in the labor movement.

Public employees unions — including nurses, firefighters and police groups — have come out strongly against his spending cap; while the state's powerful teacher's union is equally opposed to the tenure plan. The governor's third proposal, which would give the authority for drawing legislative districts to retired judges, is attracting opposition from the labor groups as well as the state's majority party, the Democrats.

Reed Dickens, spokesman for Citizens to Save California — a committee organized by Schwarzenegger supporters to back his initiatives — said the poll results showed the influence of big spending by the unions on a statewide media blitz criticizing the governor and his ideas.

"This is very early and we are being out spent in a major way," he said, estimating unions are spending $3 million a week on TV and radio ads.

Baldassare said that Schwarzenegger has proved in the past to be capable of changing voter sentiments, but the challenge now will be much harder now.

The slide shown in the new poll is similar to that measured in the Field Poll over recent months: In September, the Field Poll measured approval for the governor at 65 percent with disapproval at 22 percent. In February, the survey found 54 percent of voters favor his job performance with 35 percent disapproving and 11 percent had no opinion.

The new Public Policy poll found 55 percent of likely voters supported the governor's ballot measure to lengthen the time it takes teachers to gain tenure. The poll found, however, that 44 percent support Schwarzenegger's measure to impose a cap on state spending.

The governor's redistricting measure was not part of the poll.

Another major focus of the survey was gauging voter attitudes on a variety of education issues. Baldassare said the perception of most residents is that California's schools are underachieving.

The poll found that just 19 percent of residents believe progress has been made since 1982 on education issues while 31 percent said the school system has declined in quality.

The solution to many of the problems, education officials and some lawmakers have said, is more spending. On Tuesday, Senate Pro Tem Don Perata proposed new taxes to increase spending for schools by $4 billion a year.

The poll, however, found that while residents are concerned about funding for schools — new taxes are not popular. Seventy percent of voters are opposed to raising the sales tax while 60 percent said they oppose extending the sales tax to goods and services not currently taxed such as legal and accounting services. A strong majority — 60 percent of residents — said they supported raising income taxes on the state's highest wage earners to support schools.

The poll was conducted among 1,405 likely voters during the two week period ending April 17. It has a sampling error of 2.7 percentage points.