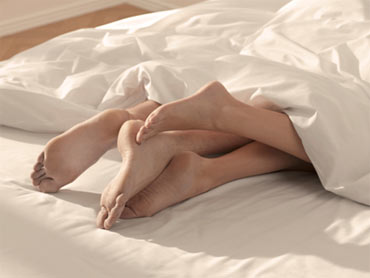 Think you know it all when it comes to sex?

Well, a majority of the baby boomers think they've learned just about all there is to know on the subject -- and more women than men are confident of their knowledge -- according to a new Associated Press-LifeGoesStrong.com poll.

Among people aged 45 to 65, 59 percent of women think they know all about sex, while just 48 percent of men share that confidence level.

"I don't think a single person in the whole world knows all there is about sex," commented Debby Herbenick of the Center for Sexual Health Promotion at Indiana University.

"Women historically have more resources," to learn about sex, noted Jennifer Bass, director of communications at the Kinsey Institute for Sex, Gender and Reproduction.

Herbenick agreed that women use their friends to talk about sex more than men do and are more likely to see a counselor or therapist.

Finding sexual pleasure can be more of a learning process for women, she said, "Women are just more likely to discuss sex in a real way with friends and other women."

But, Herbenick added, the response also raises questions about why people think they know all they need to.

"Does it mean sex is not as interesting as it used to be, is it a lack of interest," she asked, "have they lost optimism about the future of their sex lives?"

The new poll also found that among those aged 45 to 55, nearly half the men --- 48 percent -- complained that their partners don't want to have sex as often as they do, while just 13 percent of women in that age group say the same.

"Men certainly do tend to have higher sex drives, as a whole," Herbenick said, though she noted that some women also have quite high sex drives.

At that age, she pointed out, women tend to be going into menopause, which can have marked impacts on their sex lives, having hot flashes and feeling tired.

There's less disagreement between the sexes between 55 and 65, with majorities of both men and women saying couples can have a strong relationship without sexual activity. Some 59 percent of men at that age, and 69 percent of women, agreed with that.

The AP-LifeGoesStrong poll also found that overall, 28 percent of men and 21 percent of women in the baby boom generation are dissatisfied with their sex lives. That is similar to the findings of other surveys, Herbenick said.

Other findings of the poll include:

- Among age groups, baby boomers are the unhappiest with their sex lives. Some 24 percent say they're dissatisfied, compared with 12 percent of 18-29 year olds, 20 percent of 30-44 year olds and 17 percent of those over 65.

- A majority of female boomers -- 56 percent -- say their sex drive has decreased as they have gotten older, compared with 46 percent of men.

- Seventy-two percent of men aged 45-65 have fantasized about having sex with someone other than their sexual partner at the time, compared with 48 percent of women.

The AP-LifeGoesStrong.com Poll of the boomer generation about sex and relationships was conducted Oct. 1-10, by Knowledge Networks of Menlo Park, Calif. It involved online interviews with 945 adults between the ages of 45 and 65, as well as companion interviews with an additional 587 adults of other age groups, ages 18-44 and over 65 years of age. The survey has a margin of sampling error of plus or minus 3.5 percentage points for all adults, 3.9 percentage points for adults ages 45-65.

Also, on "The Early Show" Dr. Ruth Westheimer weighed in on the poll's results and shared her thoughts on baby boomer sex: