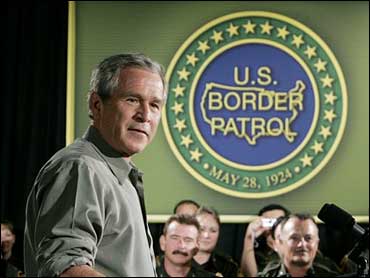 There's growing support for President Bush on the hot-button issue of immigration, according to a CBS News poll.

Most Americans say they approve of the immigration reform proposals the president outlined in a nationally televised address earlier this week. They're also somewhat optimistic that Congress will pass an immigration bill by year's end.

Sixty-two percent favor the president's plan to station up to 6,000 National Guard troops at the U.S.-Mexico border, while 32 percent are opposed.

Six in 10 also approve of Mr. Bush's proposal for a guest worker program, which would let foreign workers stay in the United States on a temporary basis and then return to their home country.

An even higher number, 77 percent, support a program that would clear the way for illegal immigrants to seek citizenship if they've been in the United States for at least five years, pay a fine and back taxes, learn to speak English and have no criminal record.

Allow foreign workers to work in U.S. temporarily and then return home
Favor

Let illegal immigrants already here for 5 years stay & work if they learn English, pay back taxes and a fine, and have no criminal record
Favor

On another issue much in the news these days, the CBS poll finds Americans narrowly approve, by 51-44 percent, of the government collecting phone records to use in the fight against terrorism.

Mr. Bush's overall approval rating remains low at just 35 percent, but that's a 4-point increase from before his immigration speech.

Americans continue to cite the war in Iraq as the most important problem facing the country, and most still say the war is going badly. Thirty-one percent approve of the president's handling of Iraq, up slightly from 29 percent earlier this month.

This poll was conducted among a nationwide random sample of 636 adults, interviewed by telephone May 16-17, 2006. The error due to sampling for results based on the entire sample could be plus or minus four percentage points. Error for subgroups may be higher.