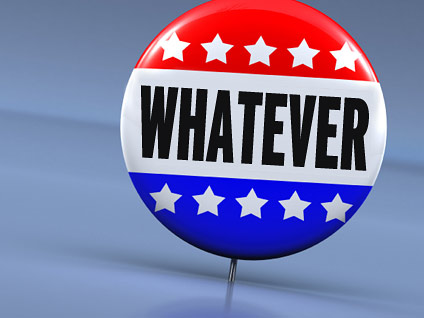 The people have spoken. But they don't feel all that great about the results.

A new CBS News poll finds that a majority of Americans are either disappointed by the outcome of last week's midterm elections or simply don't much care.

While 40 percent do say they are pleased by the election outcome, that's a significantly smaller percentage than the 58 percent who were pleased following the 2006 midterm elections.

Americans also don't expect much from those they elected: Forty-one percent predict fewer accomplishments than usual from the new Congress. The percentage who expect more to get done than usual is down from 47 percent after the 2006 midterms to 39 percent today.

Indeed, the election has done little to change Americans' views of Washington. Last month, two percent said they were "enthusiastic" about Washington; today, three percent are enthusiastic. The percentage who say they are satisfied has slightly fallen (though within the margin of error) from 23 percent to 21 percent. And dissatisfaction has actually risen, from 51 percent to 56 percent.

The good news? The increase in dissatisfaction appears to be coming as a result of slightly less anger. The percentage of Americans who describe themselves as angry at the federal government has dropped five points to 18 percent. This is largely due to the fact that the percentage of self-described angry Republicans has fallen from 35 percent to 26 percent.

Overall, however, Americans seem frustrated with their representatives and skeptical of what they are planning. The issue that Americans overwhelmingly say they want the new Congress to focus on is the economy and jobs. Yet just 30 percent say Congressional Republicans have a clear plan for creating jobs, while 58 percent say they do not. The figures for President Obama are slightly better, but not much: Thirty-eight percent say he has a clear job creation plan, while 54 percent say he does not.

Despite their gains in last week's elections, Republicans are seen less favorably than Democrats overall. Forty-six percent of Americans have a favorable view of Democrats, matching the percentage who have an unfavorable view. The favorability rating for Republicans is 42 percent, with their unfavorable rating at 48 percent.

There are some small glimmers of optimism in the poll: Majorities say they are optimistic about the next two years of Mr. Obama's presidency and about the new Congress' prospects for improving the nations' economy.

Americans are roughly divided on whether the Bush-era tax cuts for households earning over $250,000 per year should be allowed to expire as scheduled at the end of the year.

Many see opposition as the GOP's main goal: Nearly one in two say the main goal of Republicans in Congress is to block the president's policies. Thirty-six percent say Republicans' primary goal is to pass policies of their own.

Americans don't seem to want a standoff, however. Seventy-two percent - including a majority of Republicans - want Congressional Republicans to compromise, while just 21 percent say they should stick to their positions. And 78 percent say the president should compromise as well, compared to 16 percent who want him to stand his ground.

This poll was conducted among a random sample of 1,137 adults nationwide, interviewed by telephone November 7-10, 2010. Phone numbers were dialed from RDD samples of both standard land-lines and cell phones. The error due to sampling for results based on the entire sample could be plus or minus three percentage points. The error for subgroups is higher. This poll release conforms to the Standards of Disclosure of the National Council on Public Polls. Brian Montopoli is a political reporter for CBSNews.com. You can read more of his posts here. Follow Hotsheet on Facebook and Twitter.