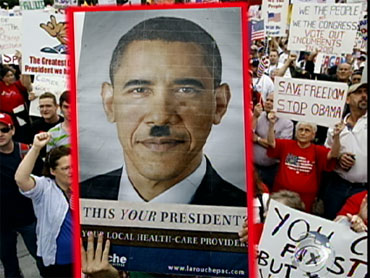 (CBS)
After a summer of political discontent, the results of a new poll suggest that large numbers of Americans still distrust official storylines in favor of fringe conspiracy theories.

The survey by Public Policy Polling finds that 42 percent of Republicans believe Barack Obama was born outside of the United States while 22 percent said they were unsure. On the other end of the insanity meter, the poll reveals that one fourth of Democrats believe that George Bush intentionally allowed the September 11, 2001 terror attacks to go ahead because the former U.S. President supposedly sought a pretext to take the United States to war in the Middle East compared. About 12% of Democrats said they were unsure.

The survey was carried out between September 18 and September 21. By comparison, a poll carried out by Research 2000 and published by the Daily Kos in late July reported that 28% of Republicans believed Obama was not born in the U.S.

The findings were released against a backdrop of growing polarization between liberals and conservatives. Spring and early summer protests against government taxation and spending by the right led to angry confrontations during the August recess when Congressmen returned to their districts. Radio and television talk show hosts also fanned the flames, injecting racially charged criticism of the president into the debate. The upshot: Posters portraying Mr. Obama as an African witch doctor and signs warning of a fascist or 2004 petition calling for a congressional hearings - as well as an investigation by the New York Attorney General - into "evidence that suggests high-level government officials may have deliberately allowed the September 11th attacks to occur." Jones, who subsequently denied being part of the "Truther" movement, later resigned his post - in no small part over the attention he attracted by signing the petition.

Back on planet earth, there was good news for the president, whose favorablilty ratings held steady at 52% for the second consecutive month. His repeated public appearances to sell health care reform also seem to be working in his favor. upport for his health care plan though. Voters are about evenly divided on the administration's health care reform plans with 45% in favor and 46% opposed. Compare that with the a month ago when 40% of respondents favored health care overhaul. The poll found that Mr. Obama was doing better with independent voters, who previously expressed opposition by a 49% to 35% margin. They now favor health care reform by a margin of 46% to 44%.