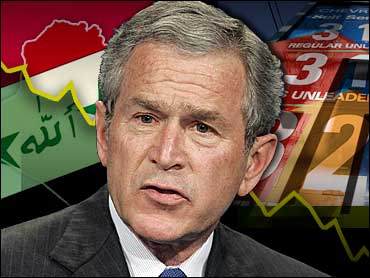 With gas prices sky-high and no end of the Iraq war in sight, President George W. Bush's approval rating hits an all-time low in a new CBS News poll.

Only 33 percent approve of his job performance, Mr. Bush's lowest approval rating yet in CBS News polls. A majority – 58 percent of those polled – say they disapprove of the president. Mr. Bush appears to be losing support from his own party. His approval rating among Republicans has dropped to 68 percent. (Read the complete poll results .)

Mr. Bush's ratings are even lower on the issues dominating news coverage: near-record gas prices and the war in Iraq.

The poll found that 74 percent of Americans disapprove of the president's handling of the gas crisis. Even more think that the administration has not developed a good plan to get gas prices under control.

DOES BUSH ADMINISTRATION HAVE CLEAR PLAN FOR KEEPING GAS PRICES DOWN?

But President Bush is not the only politician to carry the burden of high gas prices. The poll found that almost 90 percent think the government as a whole is not doing all it can to keep gas prices down. Respondents spread the blame across Washington.

WHO SHOULD HAVE RESPONSIBILITY FOR DEALING WITH GAS PRICES?

In what could be bad news for the Republican majority in Congress, 47 percent think that the Democrats would be more effective than the Republicans at keeping gas prices down. Only 20 percent thought Republicans would handle the situation better.

The violence in Iraq continues to damage Americans' opinion of the president. Exactly three years since the president gave the speech declaring "major combat operations" in Iraq at an end, Americans say that war remains the most important problem facing the country, and most do not approve of the way Mr. Bush is managing the war.

Secretary of Defense Donald Rumsfeld, whose job has come under fire from several retired generals, also receives his lowest approval rating to date.