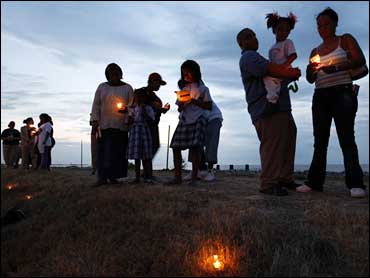 Two years after Hurricane Katrina devastated New Orleans and the Gulf Coast, fewer than half of Americans think progress is being made in rebuilding the region - and a sizeable percentage questions the government's ability to respond to similar natural disasters.

HOW MUCH PROGRESS HAS BEEN MADE IN REBUILDING THE GULF COAST?

These views show little improvement in opinion since August 2006, the one-year anniversary of Katrina's landfall and the levee breaks.

More Americans (59 percent) now say they have confidence in the government's ability to handle natural disasters than said so immediately after Katrina. But nearly four in 10 (39 percent) still express little or no confidence that the government can respond to such disasters.

CONFIDENCE IN GOVERNMENT'S ABILITY TO RESPOND TO NATURAL DISASTERS

There's a sharp racial divide in views of how much progress has been made since Katrina. Blacks, who were particularly hard hit by the hurricane, are much less likely than whites to see significant progress in rebuilding the region.

There are political differences on this question, too. Republicans are more confident than Democrats that the government can handle natural disasters like Katrina. But even among Republicans, just one in five say they have a great deal of confidence in the government.

This poll was conducted among a random sample of 1,214 adults nationwide, interviewed by telephone, Aug. 8-12, 2007. The error due to sampling for results based on the entire sample could be plus or minus three percentage points. The error for subgroups is higher. An oversample of African Americans was also conducted for this poll, for a total of 169 interviews among this group. The results were then weighted in proportion to the racial composition of the adult population in the U.S. Census. The margin of error for African Americans is plus or minus 8 percentage points.