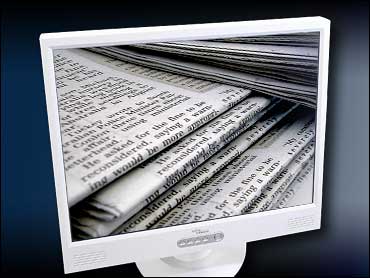 Cost-cutting newspapers are losing many of their youngest reporters, editors and photographers at the same time publishers are trying to break some of their old habits and learn new tricks on the Internet.

The findings emerged in a recent survey conducted by the Associated Press Managing Editors, an industry group. The report suggests the massive staff cuts at newspapers across the United States will make it even more difficult for the industry to adapt and remain relevant in the age of digital media.

Most of the 95 editors responding to the August survey said their newsroom staffs had shrunk by more than 10 percent during the past year. And workers between 18 and 35 years old represented the largest age group affected by the layoffs, buyouts and attrition, the survey found.

Meanwhile, the survey's respondents indicated minorities working in newsrooms were among the demographic groups least affected by the cutbacks.

Most of the survey respondents said cultivating an ethnically diverse staff remains a high priority, even as their newsrooms shrink. That echoes an April survey from the American Society of News Editors, which found that daily newspapers cut 5,900 newsroom jobs in 2008 - but maintained the percentage of minorities at roughly 13 percent.

The more recent survey by the Associated Press Managing Editors didn't seek to quantify the percentage of minorities currently working at newspapers. But diversity isn't just about ethnicity, said Tom Kearney, managing editor of the Stowe Reporter, a weekly newspaper in Vermont.

"Because Vermont is soooooo white, diversity doesn't involve race as much as it does gender and background," Kearney wrote in his survey response.

Men have been harder hit by the past year's cutbacks than women, according to the newspaper editors who answered the APME survey.

The 13-question poll didn't mine a representative sample of the roughly 1,400 daily newspapers in the United States. Still, the findings highlight how staff reductions are making it harder for many newspapers to cater to the interests and needs of their audiences.

"We did not have enough diversity to begin with," wrote Lyle Muller, managing editor of The Gazette in Cedar Rapids, Iowa. "Cutting positions put us more at risk. Meanwhile, our community is becoming more diverse so we are getting farther behind in our efforts to reflect it."

Retaining younger workers may be more important than ever as the Internet reshapes the way stories and photographs are assembled and presented. While many older journalists are adapting, the adjustment presumably isn't as difficult for younger workers who have grown up with the Internet and may have honed their digital skills in college. Having the viewpoints of younger workers also helps newspapers identify trends and issues affecting younger generations.

The Huntsville Times in Alabama has been relying on its younger reporters to help teach everyone else in the newsroom how to tap into popular sites like Facebook and MySpace to find story ideas and sources, said Curtis Coghlan, the newspaper's managing editor.

"It really has helped our coverage become younger (in tone) and more in touch with what's going on in the community," Coghlan said. "It has really helped us get more diverse stories into the paper faster."

Persuading current and prospective workers that newspapers remain an attractive career option is getting more difficult as the industry's financial woes mount. Nearly one-quarter of the newspaper industry's annual advertising sales have evaporated during the last two years, and analysts don't expect all of it to come back after the U.S. economy recovers from the longest recession since World War II.

The gloomy outlook reflects a widely held belief that advertisers will increasingly shift spend more of their marketing money to the Internet. Newspapers have been building up their Web sites to capitalize on the shift, but online ads don't generate nearly as much revenue as print ads.

With less money coming into newspapers, a large number of employees are seeking better opportunities in other industries that offer more job security, according to the survey.

"Newspapers have lost of lot of their mojo," Doctor said. "If you are 25 or 35 (years old), you are going to be part of an industry that is going to thrive in the future. That is not the way newspapers are perceived right now, rightly or wrongly."

Many editors responding to the survey seemed to understand the reasons for the defections, citing lengthy freezes on pay and hiring that have made newsroom jobs less enjoyable.

To lure and retain workers, newspaper publishers "should increase their pay and benefits and treat people with kindness and dignity," wrote Kristen Mustain, editor of The Grove Sun in Oklahoma.

Other editors responding to the survey seemed resigned to finding ways to maintain their newspapers' standards with a less diverse staff.

The Leaf-Chronicle in Clarksville, Tenn., is hoping better use of the Web can help offset its recent reductions in staff.

"We still know what to do (on diversity)," wrote Richard Stevens, The Leaf-Chronicle's executive editor. "It's just harder and harder to do it with fewer resources. A main challenge now is to understand how diverse readers are using digital tools, and to remember diversity concepts when shaping digital content."