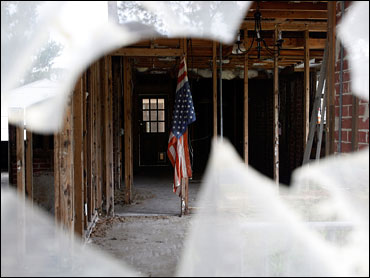 
It's been two years since Hurricane Katrina devastated the Gulf Coast, and the failure of the levees flooded much of New Orleans. How did the hurricane affect public opinion - and does it still have an impact?

In the immediate aftermath of Katrina, there wasn't any change in President Bush's approval rating. From August, before the disaster, through the following January, the president's approval rating hovered between 37 percent and 42 percent - and the low point came in October, a month and a half after the tragedy.

However, there was little positive reaction to his management of the hurricane. The public's first response to a crisis is usually to rally around the flag and the president. But in this case that feeling quickly dissipated. As public realization of the magnitude of the event grew, so did criticism of Bush and his emergency team. A CBS News Poll conducted August 30-31 in the two days following Katrina's landfall showed support for what the President was doing: 51 percent approved of the way he was handling the response to Katrina, and only 12 percent disapproved. Many people - about a third - weren't sure. The Katrina approval rating was significantly higher than the president's overall job rating, which was 41 percent in the same poll.

But within a week, opinion had changed. By the time CBS News polled on Sept. 6-7, nearly everyone had an opinion - and it was overwhelmingly negative. Only 38 percent approved of the president's handling of the response to Katrina. Fifty-eight percent disapproved!

This castigation of the president became a criticism of the government, too, particularly its ability to handle natural disasters and crises. Some of those negative assessments continue today.

After Katrina, we asked Americans how much confidence they had in the ability of the government to respond to natural disasters. Barely half said they had confidence, and only 19 percent had "a great deal" of confidence. While confidence rebounded to 63 percent a month later, it was back down below 50 percent six months after Katrina.

Worse, the share of the public who said they had some confidence in the government's ability to protect its citizens from future terrorist attacks dropped 10 points: from 69 percent in July, before the hurricane, to 59 percent afterward.

Thirteen years earlier, in 1992, the president's father - George H.W. Bush - had faced Hurricane Andrew, which devastated parts of Florida. But 64 percent of Americans approved of the way the senior Bush handled the response to Andrew, even though his overall approval rating was stuck at just over 40 percent. And that year, he was also trailing Bill Clinton in the race for the presidency.

In 1992, Americans were negative about whether the government's hurricane response was adequate: 52 percent of registered voters said it was not; just 41 percent said it was. But that evaluation seems rosy compared with the post-Katrina assessment. Just 20 percent of Americans said that response was adequate, while 77 percent said the government should have done much better. It's worth noting, however, that Katrina affected more people than Andrew. Sixteen percent of Americans said they knew someone directly affected by Hurricane Andrew, while nearly twice as many - 29 percent - knew someone affected by Katrina.

One year after the hurricane, the evaluation of the president's ability to handle a crisis had barely budged. Just about half said they had confidence, and only 27 percent had a lot of confidence - a far cry from the post-9/11 assessments. And his approval ratings kept falling, and are now even lower than they were then.

There has been little change, however, in the public's view of the recovery effort in New Orleans and the Gulf Coast. Opinion has remained almost constant from the first time we asked about the recovery, six months after the hurricane struck. In February 2006, 41 percent saw at least some progress. After another six months, in August 2006, 45 percent saw some progress. And we received the same response in the most recent poll this month, when just 45 percent saw progress. What is most striking is that, in every one of those three polls, fewer than one in 10 Americans (and hardly any African-Americans) said they saw "a lot" of progress.

Just like New Orleans and the other affected areas of the Gulf Coast, public opinion has yet to recover fully from Katrina's impact.
By Kathy Frankovic