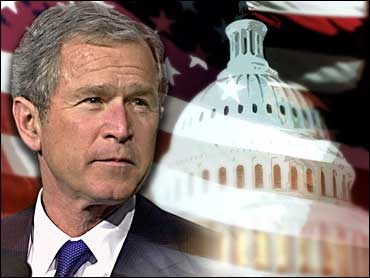 But at least he's doing better than Congress, which earns a thumbs-up from only 35 percent of Americans – nearly as low a rating as it received last month immediately after lawmakers' unpopular intervention in the Terri Schiavo case.

Approval ratings for Congress have historically been low but they're now at one of their lowest points since the late 1990s. Disapproval of the Republican-controlled Congress even extends to 39 percent of Republicans, along with 59 percent of Democrats.

Asked to name the thing Congress has done over the past year that sticks out most in their minds, the highest number, 9 percent, said the Schiavo decision; 3 percent mentioned actions surrounding the Iraq war; 4 percent said Congress had accomplished nothing; while 68 percent could not name anything it had done.

Americans cited the war in Iraq as the country's top priority, followed by the economy and jobs, Social Security, terrorism, health care and, for the first time, gas prices. The Terri Schiavo case, or related legislative action, was not mentioned as a top concern.

But few Americans think Congress really cares about what they think anyway. Only 8 percent say elected officials pay a good deal of attention to the people who elect them; 43 percent think they pay some attention to voters, and 43 percent say not much attention.

While most Americans don't know a great deal about the Republican leaders of Congress, Tom DeLay – the House majority leader embroiled in a scandal over possible ethics violations – is the best known and the least liked.

While seven in ten are undecided or don't know enough about DeLay to rate his job performance, among those familiar with him, three times as many (22 percent) have a negative view as have a positive one (7 percent).

Senate Majority Leader Bill Frist and House Speaker Dennis Hastert are even less known by the public; opinions on them are divided.

Overall, Americans have a slightly more negative view of Republicans in Congress than of their Democratic counterparts.

As for President Bush, his overall approval rating remained little changed at 44 percent, but his disapproval rating climbed above 50 percent for only the third time since he took office.

And despite the president's efforts to rally support for his Social Security plan, seven in ten Americans say they're uneasy about his approach to the issue.

More people (49 percent) say the president's plan to partially privatize the system is a bad idea than say it's a good idea (45 percent).

Significantly, there's been no increase in support for Mr. Bush's Social Security plan since he and other Republicans began actively campaigning for it in January.