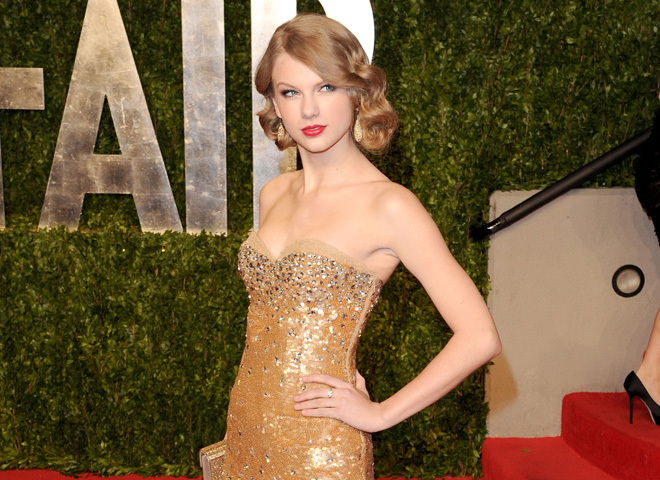 At Vanity Fair's packed, exclusive bash at West Hollywood's Sunset Tower Hotel, just one of several soirees Sunday, A-list musicians mingled with Oscar nominees and winners from one corner of the room to the other.

Teen singing sensation Bieber, wearing all black and sporting a new, shorter haircut, showed off his affection for Disney actress Selena Gomez. The pair snuggled in a patio booth, holding hands, then later bear-hugged 14-year-old "True Grit" Best Supporting Actress nominee Hailee Steinfeld. Bieber, who turns 17 on Tuesday, clutched his iPhone, which depicted a photo of him with Gomez as its home screen, as they ran out of the party before midnight.

Close by, country-pop star Taylor Swift, statuesque in a sparkling Zuhair Murad mini dress, kept close to friend and actress Emma Stone. Swift later stole away to meet up with Jake Gyllenhaal, who she has been linked to in the past. The two spoke in hushed tones by the women's restroom. Swift left the party alone.

By the time "Black Swan" actress Natalie Portman arrived with her best actress Oscar statuette in one hand, and her fiance Benjamin Millepied gripping the other, the party was in full swing. Accepting congratulations left and right, a tired but happy looking Portman, pregnant with her first child, left after only 20 minutes.

"I just did the Oscars with him, and I'm in love with him," Oscar host Anne Hathaway jokingly gushed about co-host James Franco to another guest while in line for the bathroom.

Also while in the bathroom, stylish actress Eva Mendes wasn't too uptight to adjust a friend's dress, or remark while looking at herself in the mirror, "It looks like a dead animal crawled up my nose!"

Other celebrity attendees included Jennifer Hudson, Hugh Jackman, Donald Trump, Charlize Theron, Jeremy Renner, Michelle Williams, Amy Adams and Gwyneth Paltrow, who waved to screaming fans outside and shouted "I love you too!" as she left in her limo.

A short drive away, at the Elton John AIDS Foundation's 19th annual Oscar viewing dinner and after-party at the Pacific Design Center's tented courtyard, musicians also came together with movie and TV stars to eat, drink, schmooze and participate in the night's big auction to raise money for AIDS research.

Seal and his wife Heidi Klum sat at Elton John's table, alongside "Glee" star Chris Colpher and his costar Ashley Fink. "We've been trading witty sayings with Elton," said a starry-eyed Colpher. "They're hilarious," added Fink of John and his partner David Furnish.

Kim Kardashian, conservatively classy in dark strapless J. Mendel, showed up to dinner late, as did Kelly Osbourne, who sat with her mom, Sharon. Kardashian and Osbourne toured the party together later.

Wainwright, a new father, joked about eventually swapping baby stories with John and Furnish, new dads themselves to son Zachary.

"Oh I'll bet we'll start having late-night conversations about vomiting, except we're not the ones doing it anymore," he said, grinning.

Later, John referenced his own British roots, plus British film "The King's Speech" winning best picture, when introducing British band Florence and the Machine as the night's performer. With her fiery red hair and sheer white hooded robe, belter Florence Welch looked every inch a mysterious rock star. She danced and twirled on stage while singing into a microphone decorated with red roses.

The Governor's Ball, the Academy Awards' official after-party, at Hollywood's Kodak Theatre, was the first official stop for most guests at the Oscars.

Back at John's bash, though, Oscar-winning actor Sir Ben Kingsley voiced his own preference.

"When I'm not nominated, I'd rather be here, at this party, than be in that room, at the Kodak," said Kingsley. "Here, at Elton's party, you can hopefully have a decent conversation instead of the ritualized blah blah blah."