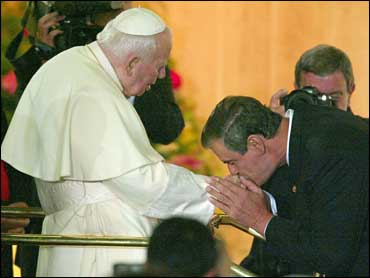 As feathered Aztec dancers and robed Catholic clergy moved through an incense-filled basilica, Pope John Paul II canonized the first Indian saint in the Americas on Wednesday, using the ceremony to urge Mexicans to help its large Indian population.

Hundreds of thousands of believers cheered and wept in the streets outside as the pope called Juan Diego a catalyst in the conversion of millions of Indians to Christianity.

The frail 82-year-old pope, nearing the end of an 11-day pilgrimage that began in Canada, looked weary during the three-hour canonization Mass, often stuttering but speaking in a reasonably firm voice.

Although some question whether the 16th-century Juan Diego actually existed, John Paul stressed his importance as a man who helped the worlds of Spain's conquistadors and Mexico's native peoples come together. But the pope made clear the indigenous — 10 percent of the population — have been let down by Mexican society.

"Mexico needs its indigenous peoples and these people need Mexico," John Paul declared, setting an agenda for his church, which is battling inroads among Indians by evangelical Protestants.

Inside the Basilica of the Virgin of Guadalupe, dancers dressed in feathered Aztec costumes shook rattles and blew into conch shells as the image of the new saint was carried to the altar. Priests read from the Bible in Spanish and in Nahuatl, the language of the Aztecs.

"Christ's message, through his mother, took up the central elements of indigenous culture, purified them and gave them the definitive sense of salvation," John Paul said.

"He facilitated the fruitful meeting of two worlds and became the catalyst for a new Mexican identity."

Following up on remarks Tuesday in Guatemala, the pontiff appealed for better treatment for Indians in the Americas. He asked Mexicans to help create "greater justice and solidarity" for all, and to "support the indigenous peoples in their legitimate aspirations, respecting and defending the authentic values of each ethnic group."

The pope, who suffers from symptoms of Parkinson's disease and hip and knee problems, slumped in a gilded chair placed near Juan Diego's cloak, straining to raise his head before speaking.

John Paul heads back to Rome Thursday but will be on the road again soon, making a four-day trip to his native Poland starting Aug. 16.

President Vicente Fox, criticized by some for kissing the pope's ring when John Paul arrived Tuesday evening, also attended the canonization, the first time a Mexican president has attended a papal Mass.

Mexico only recently repealed what for decades were some of the world's strictest anti-religion laws, designed to rein in a church that for centuries ruled as part of the colonial power structure, owned much of the country's land and allied itself with foreign invaders and domestic dictators.

Only 22,000 people fit into the basilica, and earlier plans for a Mass that would accommodate up to 5 million people were canceled. So most people had to be content with catching a glimpse of John Paul as he passed by on the street in his popemobile.

"Our faith is great, so we want to see him close up," said Juventino Carrillo of San Jose, Calif., a 54-year-old cook at Stanford University.

Mexicans have a special affection for John Paul, who chose their country for the first foreign trip of his papacy and has returned for the fifth time on what many expect will be one of his last. The pope repeatedly expressed his delight to be back in Mexico, where in 1979 he strummed a guitar with mariachis and donned a sombrero at a bullfighting ring.

Juan Diego was an Indian born before Europeans arrived in the New World. According to church tradition, the Virgin of Guadalupe appeared to Juan Diego in 1531, leaving an olive-skinned image of herself on his cloak and helping drive the conversion of millions of Indians throughout the Americas.

Debate has intensified in recent months over Juan Diego, who some believe never existed. Several Mexican priests unsuccessfully petitioned the Vatican to delay the canonization because of the doubts.

But the vast majority of Mexicans tie their national identity to the Virgin of Guadalupe, and to the man to whom she appeared.

"This is the first pope to recognize an Indian, a humble Indian," said Maria Socorro Dominguez, a 48-year-old lawyer among the faithful lining the streets.

More than 30,000 police were deployed around the city to keep the peace, and some officers said they were told they wouldn't sleep for three days — the duration of the pope's stay.