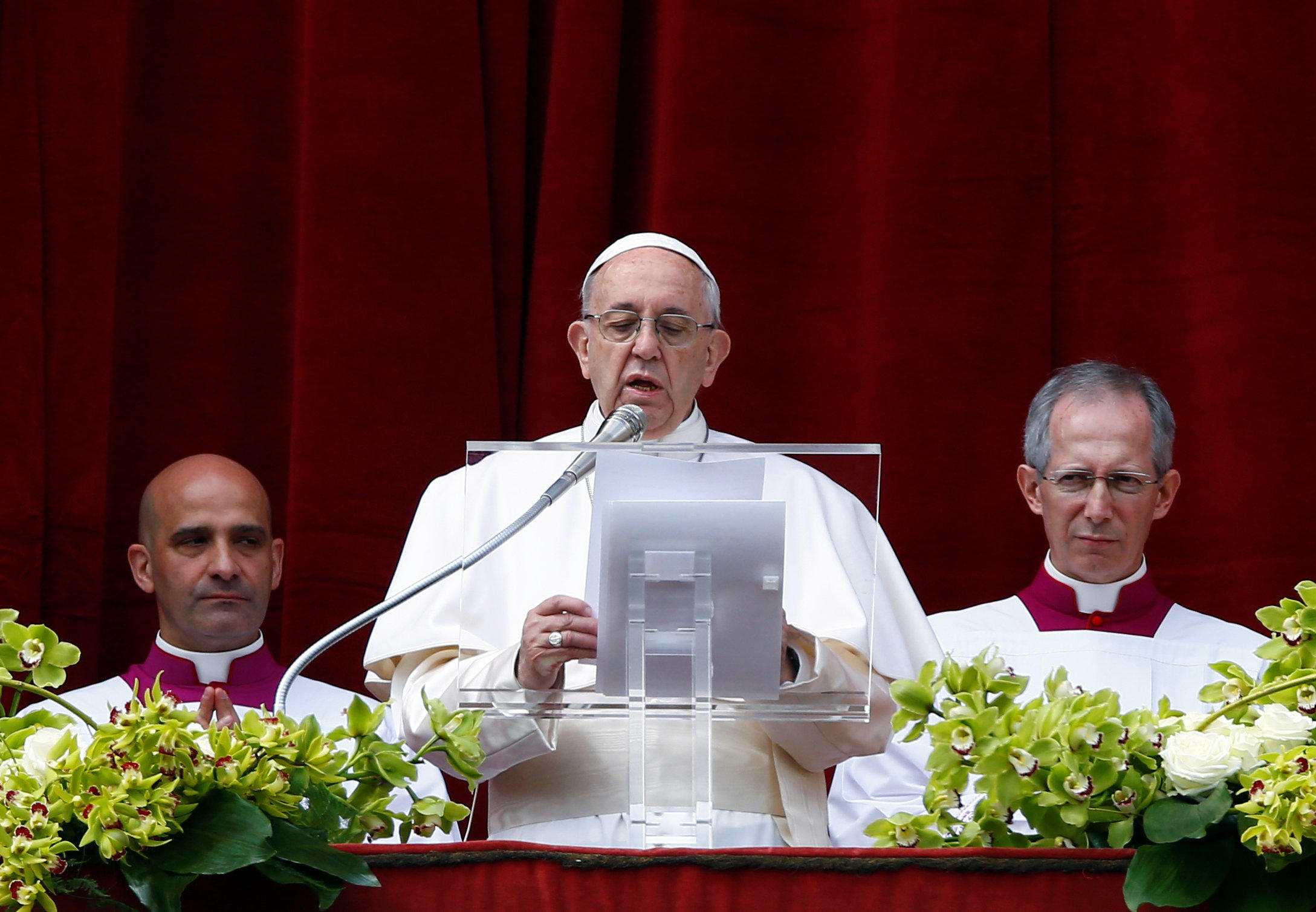 VATICAN CITY -- On Christianity's most joyful day, Pope Francis in his Easter Sunday message called for peace in a world marked by war and conflict, "beginning with the beloved and long-suffering land of Syria," and extending to the entire Middle East, the Korean peninsula and parts of Africa affected by "hunger, endemic conflicts and terrorism."

Francis reflected on the power of Christianity's core belief -- that Jesus rose from the dead following crucifixion -- in his formal "Urbi et Orbi" Easter message delivered from the balcony of St. Peter's Basilica to a packed square below.

The pontiff said the message of the resurrection offers hope in a world "marked by so many acts of injustice and violence."

"It bears fruits of hope and dignity where there are deprivation and exclusion, hunger and unemployment; where there are migrants and refugees, so often rejected by today's culture of waste, and victims of the drug trade, human trafficking and contemporary forms of slavery," the pope said.

He called for a "swift end" to carnage in Syria, demanding that aid be delivered to the needy there and calling for "fitting conditions for the returned and the displaced." Francis has been outspoken in his condemnation of the civil war in Syria, and was credited with leading the opposition to military intervention by the West in 2013, according to BBC Vatican correspondent David Willey.

The pope also urged reconciliation in Israel and hoped that mutual respect would "prevail over divisions" in Yemen and the entire Middle East.

Turning to Asia, Francis hoped that talks underway could bring peace to the Korean peninsula, urging "those who are directly responsible act with wisdom and discernment to promote the good of the Korean people."

For Ukraine, the pope urged more steps to bring harmony to that divided nation. He also called for peace in South Sudan and the Democratic Republic of Congo, urging the world not to forget victims of conflict, especially children.

"May there be no lack of solidarity with all those forced to leave their native lands and lacking the bare essentials for living," said the pope who has often championed the cause of migrants and refugees.

The church's first pontiff from Latin America cited in particular the problems in Venezuela, voicing hope the country would "find a just, peaceful and humane way to surmount quickly the political and humanitarian crises that grip it."

Earlier, tens of thousands of faithful underwent heavy security checks to enter St. Peter's Square to participate in Easter Sunday Mass celebrated by the pope, followed by his "Urbi et Orbi" message ("to the city and the world").

Security precautions included bag checks and metal detector wands for everyone entering the square, while the main avenue leading to the Vatican, as well as smaller adjoining streets, were closed to traffic.

Francis opened Easter festivities with a Tweet to his global flock: "Our faith is born on Easter morning: Jesus is alive! The experience is at the heart of the Christian message."

Elsewhere, hundreds of Christians marked Easter by flocking to Jerusalem's Church of the Holy Sepulchre, built on the site where they believe Jesus was crucified, buried and resurrected.