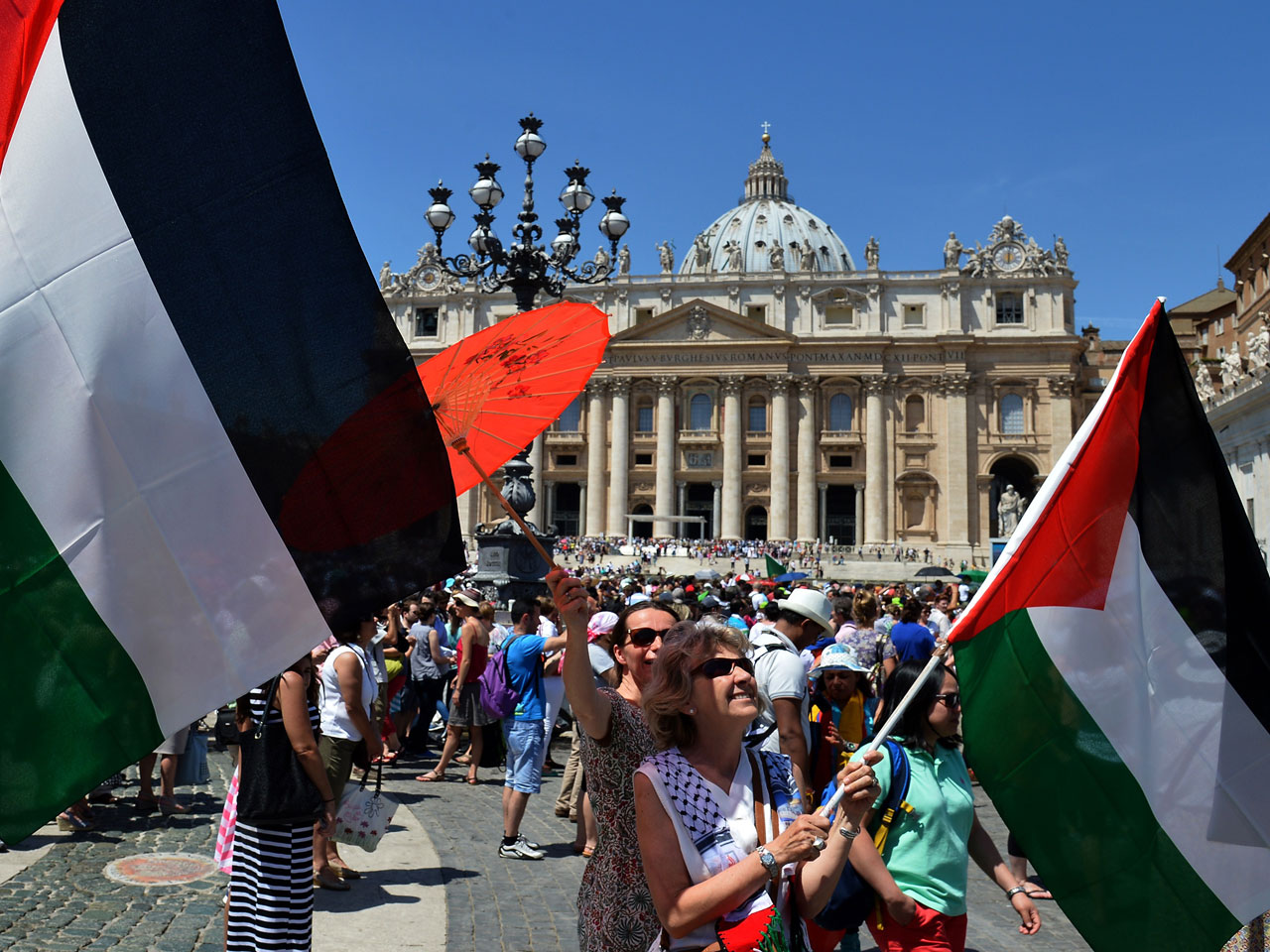 VATICAN CITY - Vatican officials insist no political agenda is lurking behind Pope Francis' invitation to the Israeli and Palestinian presidents to pray for peace together in the Vatican gardens, and no concrete initiatives are expected.

But Sunday's unusual summit - with Jewish, Christian and Muslim prayers intoned in the shadow of St. Peter's Basilica - could take on great significance on the ground. And it will certainly enhance Francis' reputation as a leader unhindered by diplomatic and theological protocol who is willing to take risks for the sake of peace.

The prayer was organized in the two weeks since Francis first made the surprise invitation from the biblical city of Bethlehem. On Sunday, he asked the crowd attending his weekly noon blessing to join in with their own prayers as well.

As Palestinian flags fluttered in the breeze, Francis pressed the importance of "surprise" in the Catholic Church, saying a church that doesn't have the ability to surprise with its message of love is "weak, sick and dying and needs CPR."

Francis showed himself a master of improvisation and surprise during his trip to the Mideast, stopping to pray at the Israeli security barrier surrounding Bethlehem and then, at Israel's request, changing his busy itinerary to pray at a memorial to Jews killed in suicide bombings and other attacks.

But it was his invitation to Israeli President Shimon Peres and Palestinian President Mahmoud Abbas - two men who signed the Oslo peace accords in 1993 - to come to "my home" to pray for peace that captured imaginations and led to Sunday's common call for peace on a patch of lawn inside the Vatican walls.

"In the Middle East, symbolic gestures and incremental steps are important," noted the Rev. Thomas Reese, a veteran Vatican analyst for the National Catholic Reporter. "And who knows what conversations can occur behind closed doors in the Vatican."

The meeting will mark a delicate balancing act of faith and politics: It will begin with three separate and purely religious prayers for peace in the Jewish, Christian and Muslim traditions. The Israeli and Palestinian presidents along with the pope will then deliver remarks, with the spiritual leader of the world's Orthodox Christians, Ecumenical Patriarch Bartholomew I, along to witness the whole thing.

Vatican officials have described the evening as something of a "time-out" in political negotiations, the last round of which collapsed in failure in April. They say it is merely designed to rekindle the desire and dream for peace.

Peres has no formal role in peace negotiations, holds a largely ceremonial post and leaves office at the end of the month.

But Nadav Tamir, a political adviser to Peres, said Sunday the Israeli government supported the trip and Israeli Prime Minister Benjamin Netanyahu was in "constant contact" with Peres. Speaking on Israeli Army Radio, Tamir stressed the meeting was not political, even though he said Peres and Abbas were expected to discuss political developments when they meet in private after the prayer.

Netanyahu had urged the world to shun Abbas' new unity government which took office last week because it is backed by the Islamic militant group Hamas. His pleas have been ignored by the West, with both the U.S. and the European Union saying they will give the unity government a chance.

Peres' participation thus undermines Netanyahu's attempts to isolate the Palestinians, and instead adds to the growing isolation of Netanyahu's hard-line position. Netanyahu's office has declined repeated requests for comment about the Vatican summit.

Abbas, for his part, told Italian daily La Repubblica that Francis' invitation was "an act of great courage."

"Nothing should stop us in the search for solutions so that both of our people can live in their own sovereign state," he was quoted as saying in Sunday's editions.