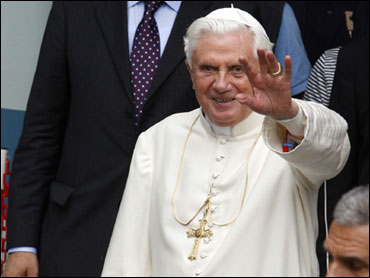 Germany's top bishop briefed Pope Benedict XVI on the spiraling cases of clerical sex abuse in the pontiff's native Germany on Friday and said the pope encouraged him to pursue the truth and assist the victims.

Archbishop Robert Zollitsch said the pope was "greatly dismayed" and "deeply moved" as he was being briefed on the scandal during his 45-minute private audience in the Vatican. Zollitsch said he briefed the pope in particular on the measures being taken so far to confront the scandal.

"The Holy Father was very satisfied with our decisions," Zollitsch told a press conference after the meeting.

At least 170 former students from Catholic schools in Germany have come forward recently with claims of physical and sexual abuse, including at an all-boys choir once led by the pope's brother.

Zollitsch also said he briefed the Congregation for the Doctrine of the Faith on measures implemented in Germany, and that the Vatican is considering a set of universal norms to deal with cases of clerical sex abuse.

"I'm grateful for the encouragement he (Benedict) gave me to continue carrying out our measures in a decisive and courageous way," he said.

Benedict hasn't commented on the German scandal himself. But he decried the sexual abuse of children as a "heinous crime" after he summoned Irish bishops to Rome last month to discuss the even more widespread scandal in the Irish church.

In addition to the cases in Germany and Ireland, three retired priests at a Catholic school in Austria were relieved of their clerical duties this week after allegations of physical and sexual abuse emerged. Two other priests in Austria have resigned amid similar allegations. And in the Netherlands, Catholic bishops announced an independent inquiry into more than 200 allegations of sexual abuse of children by priests at church schools and apologized to victims.

But of all the European scandals, the German abuse allegations are particularly sensitive because Germany is Benedict's homeland, where he served as archbishop of Munich from 1977 to 1982, and because the scandals involve the prestigious choir that was led by his brother, Georg Ratzinger, from 1964 until 1994.

Zollitsch said he and Benedict did not discuss the allegations surrounding the pontiff's brother.

Ratzinger has repeatedly said the sexual abuse allegations date from before his tenure as choir director and that he never heard of them, although he acknowledged slapping pupils as punishment.

According to a poll conducted by the Emnid institute for N24 television, a full 86 percent of Germans contend the Roman Catholic Church has failed to do enough to explain the allegations of abuse in church-run schools and institutions. Only 10 percent of the 1,000 people polled on March 10 felt the church was doing enough.

Also, 68 percent of those polled say the abuse scandal has raised their criticism of the church's educational abilities, while 28 percent still trust the church to teach their children.

Bishop Stephan Ackermann, who has been appointed by the church to handle abuse allegations in Germany, said that he would also follow up on any charges against bishops.

"Bishops or parishes that are not cooperative will be asked for information," Ackermann said Thursday on ZDF television.