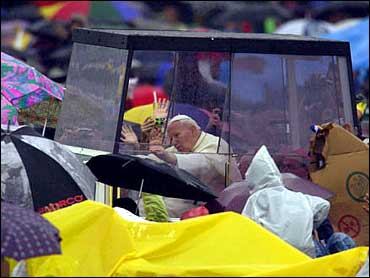 A dawn storm drenched hundreds of thousands of Catholic faithful sleeping outside at the World Youth Day vigil and continuing rain delayed the start of Sunday's final Mass with Pope John Paul.

Gray morning skies greeted the throng that stretched as far as the eye could see at a former airfield converted to a giant outdoor church, with a 160-foot cross towering above from the stage.

The Mass that concludes a week of World Youth Day activities began late, with the pope arriving 20 minutes behind schedule in a soaking rain. Before the military helicopter landed, an announcement to the crowd of more than 500,000 asked people to clear the path for his "popemobile" to bring him to the stage.

Those who stayed overnight said the storm made things messy and uncomfortable, but they didn't seem to mind.

"When it stopped, we all woke up in puddles," said Cynthia Lashinski, 17, still in her sleeping bag with plastic on the bottom in a futile attempt to ward off the wet.

The Mass concludes a week of World Youth Day activities in which the frail, 82-year-old pontiff has preached a message of devotion to the teachings of Jesus Christ.

During a 2 1/2-hour prayer service at the vigil on Saturday night, John Paul urged young pilgrims to become builders of a new civilization of freedom, peace and love.

The crowd cheered him wildly, waving flags from every corner of the world and chanting his name in open affection.

Speaking in French and English, the pontiff said the new millennium opened with two contrasting scenarios: the sight of pilgrims in Rome for the Holy Year, and the "terrible terrorist attack on New York, an image that is sort of an icon of a world in which hostility and hatred seem to prevail."

"The question that arises is dramatic: On what foundation must we build the new historical era that is emerging from the great transformations of the 20th century?" he asked.

His voice strong despite symptoms of Parkinson's disease and other health problems, John Paul asked whether it was enough to rely on the technological revolution without referring to an individual's spiritual dimension.

The answer: "Christ alone is the cornerstone on which it is possible to build one's existence."

He urged young people to be the builders of a "civilization of love" and learn "to build brick by brick, the city of God within the city of man."

John Paul waved at the leaping, shouting young people along the route of his "popemobile" as it made its way to a giant stage adorned with the cross, which was visible for miles. Among those in the crowd was Prime Minister Jean Chretien.

For one of the few times so far on the trip that began Tuesday, John Paul used a cart pushed by aides to cross the stage, his normal practice in recent months. In Canada, he had made a point of walking with a cane, usually with an aide holding his arm.

Throughout Saturday, crowds of people singing songs and carrying what they needed to spend the night outdoors jammed streets in north Toronto to get to the concrete expanse at Downsview Park as big as 180 soccer fields.

John Paul met briefly in separate audiences with Chretien and other Canadian leaders before flying by helicopter to the park.

More than 200,000 young Catholics from 170 nations registered for this year's World Youth Day, a decline from previous years. The pope inaugurated the event in 1985 as a way to invigorate devotion among the young.

There was no lack of enthusiasm among the multitudes who walked for miles to the vigil in midday summer heat Saturday. Some welcomed water sprayed on them by people on highway bridges, and paramedics on golf carts cruised alongside to assist those overcome by the high humidity and temperatures.

"You feel the world is coming all together for the same reason," said 14-year-old Annalynn David of Sacramento, California.

Lisa Hieronynus, 27, of New York City, said the huge numbers bolstered the faith of those gathering here as the Roman Catholic church tries to emerge from the sex-abuse scandals in the United States.

"It's not every day that you get to experience this kind of solidarity," she said. "A lot of people were shaken and a lot of people woke up. This sort of event will help the pope in the long run."

Many brought tents and others built improvised shelters of tarpaulins, plastic barricades and cardboard boxes. In one makeshift camp, Los Angeles youth minister Erick Rubalcava, 28, had a box with a mini-television and battery-powered fan.

On Monday, the pope proceeds to Guatemala, then to Mexico to complete his 11-day trip, the 97th of his nearly quarter-century papacy. While aides had expressed concern that the trip would be too much for his declining health, the pope has surprised all by looking stronger and speaking more clearly than in recent months.

published, broadcast, rewritten, or redistributed. The Associated Press and Reuters Limited contributed to this report