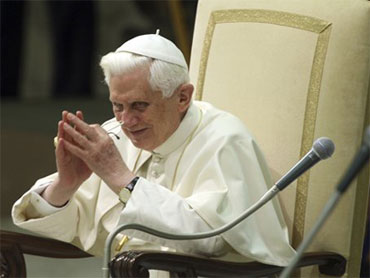 Pope Benedict XVI is addressing Ireland on Saturday in an unprecedented letter apologizing for chronic Catholic child abuse in this once-devout land. His message will be watched closely by angry Catholics from Boston to Berlin to see if he acknowledges only the abuse itself - or the decades of Vatican-approved cover-ups too.

Throughout the Catholic world, the church is only starting to come to terms with the scale of child abuse permitted in many of its parishes and schools throughout the 20th century. The tide of scandal has surged from Canada and Australia in the 1980s, to Ireland in the 1990s, reaching the United States at the turn of the century and finally Benedict's German homeland today.

Commentators and victims' rights activists agree that, to begin mending the church's battered image, Benedict's message to Ireland - his first pastoral letter on child abuse in the church - must break his silence on the pivotal role of the Catholic hierarchy in shielding pedophiles from prosecution.

Including under the pope's own watch in Munich decades ago.

"Is it not time for Pope Benedict XVI himself to acknowledge his share of responsibility, instead of whining about a campaign against his person? No other person in the church has had to deal with so many cases of abuse crossing his desk," said the Rev. Hans Kung, a Swiss priest and dissident Catholic theologian.

"Honesty demands that Joseph Ratzinger himself, the man who for decades has been principally responsible for the worldwide cover-up, at last pronounce his own mea culpa," Kung said.

Benedict, who served as archbishop of Munich from 1977 to 1982, has yet to speak about hundreds of abuse cases surfacing in Germany, particularly in his former archdiocese, since January.

The cases include the Rev. Peter Hullerman, who was already suspected of abusing boys in the western Germany city of Essen when Ratzinger approved his transfer to Munich for private treatment in 1980. Hullerman was permitted to maintain contact with children, was convicted of abusing a boy in 1986 and was discovered last week still to be working as a priest in contact with children.

Dirk Taenzler, director of the Federation for German Catholic Youth, said his members were appalled by the revelations of past abuse in church-run schools and choirs - and wondered why the pope had yet to address his fellow Germans as he is about to do with the Irish.

"Everyone is suffering from the church's bad image," Taenzler said. "It is an issue in every congregation and everyone is trying to cope."

Benedict's successor in Munich, Archbishop Reinhard Marx, said the pope's letter to Ireland "will of course affect us. The pope always speaks for everyone. It is not so individual, for specific groups or countries. That word will also be important for us."

Marx said the pope should not be expected to take responsibility for abuses committed by individual priests. "We expect the pope to take a stand on everything every time, but we are responsible for what happens here," he said.

In the United States, where several dioceses have been driven to bankruptcy amid abuse lawsuits, activists called for the pope to be candid about his own failings - and for bishops' heads to roll just as happened in Boston to former Archbishop Bernard Law.

"So far the church hierarchy has been very short on accountability. They've had to be pushed to come clean about their responsibility for anything," said Dan Bartley, U.S. president of Voice of the Faithful, a Catholic lay group that lobbies for reform within the church. "He needs to call for any bishops involved in the Irish crisis to resign. But unfortunately we're not expecting that."

Ray Flynn, former U.S. ambassador to the Vatican, said the pope has been slow to speak publicly about the church's abuse crisis because he lacks media savvy, not because he wants to stonewall critics or doesn't care about victims.

"He is a very quiet, unassuming, non-pretentious man," Flynn said.

"He's got to be transparent, forthcoming, right out front and point the finger where the blame is," he said. "I think the truth will set you free, and that's what people want."

In Ireland, where the first major priest-pedophile scandal toppled the entire government in 1994, victims say they are tired of hearing church apologies that contain no acknowledgment of how bishops under Vatican direction let child molesters operate with impunity.

"What we probably will get - I hope I'm wrong - are a lot of expressions of regret and sorrow and apology about the horrors of child abuse in the past. I've heard that so often now," said Marie Collins, one of Ireland's most prominent campaigners for victims' rights. "I want to hear apologies for the actions of the church hierarchy."

Collins, 63, was repeatedly raped by a Dublin priest, Paul McGennis, while in a children's hospital in 1960. Irish bishops knew at the time about McGennis' pedophilia - including by confiscating his nude-photo collection of children - but didn't bar him from the priesthood until 1997 shortly before he received an 18-month prison sentence for abusing Collins and another girl.

Three Irish government-ordered investigations published from 2005 to 2009 have documented how thousands of Irish children suffered rape, molestation and other abuse by priests in their parishes and by nuns and brothers in boarding schools and orphanages. Irish bishops did not report a single case to police until 1996 after victims began to sue the church.

Even today, a 2001 Vatican edict authored by Ratzinger - as leader of the Congregation for the Doctrine of the Faith - continues to sow confusion and anger in the wider Catholic world. It instructed bishops to report all cases of child abuse to Vatican authorities under strict secrecy and contained no instructions on reporting crimes to police.

Some church scholars say Benedict's instructions actually sought to encourage a church crackdown on abusers in the ranks, not protect them, and are hopeful that Saturday's message to the Irish might offer a fresh start for the church worldwide.

"If we do take serious and proper steps, the house can be cleaned and the church will improve for it," said the Rev. John Wauck, a commentator on Vatican affairs who teaches literature at a Rome university run by the conservative Catholic society Opus Dei.

"I think that's something to look forward to with hope. I imagine the letter will be quite hopeful and forward-looking," Wauck said.