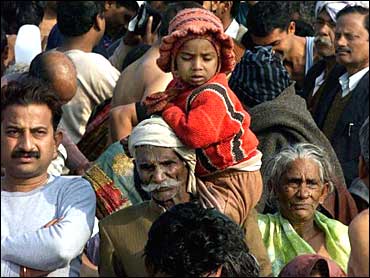 Political unrest and war have affected the ability of many developing nations in Africa and Asia to promote family planning and literacy programs that could reduce soaring birth rates and poverty levels, the author of a new demographic study says.

"Have and have-not nations live in totally different worlds," Haub said. "But they are all shaped by their rate of growth."

The latest edition of the "World Population Data Sheet" estimates the global population will rise 46 percent between now and 2050 to about 9 billion, a level that has also been predicted by the United Nations and other groups.

The U.S. population is expected to grow 45 percent to 422 million during the same time, paced by a stable birth rate and high levels of immigration.

Most of the world growth will come in developing nations. Among them are two critical countries in the U.S. war on terrorism: Pakistan, where the population will grow 134 percent by 2050 to 349 million; and Afghanistan, which will grow at the same pace to 67 million.

The population in the Congo, which has been torn by civil war, could more than triple during the same period to 181 million. And Africa's most populous country, Nigeria, could more than double to 307 million.

"The governments don't have the wherewithal to fund the (family planning) programs. And any family planning program is interrupted by political strife, and there's plenty of that going around," Haub said.

Growth in Africa comes even though the continent has some of the highest rates of HIV and AIDS infection in the world.

President George W. Bush has promoted a plan to spend $15 billion over five years to combat the disease in Africa and the Caribbean. Congress gave its support and is in the process of passing legislation to make the money available.

The population of Botswana, which has one of the highest HIV infection rates in the world, was expected to decline 43 percent by 2050 to just under 1 million.

The United States is one of the few industrialized nations growing, Haub said. Europe's population is expected to decrease 9 percent to 664 million.

The findings echoed those released earlier this year in a study in the journal Science, which said that European population growth reached a turning point in 2000.

That is when the number of children there dropped to a level that statistically assured there will be fewer parents in the next generation than there are in the current generation.

An increasing focus among women on education and career and away from child-rearing roles played a major factor in the projected decline, researchers have said.